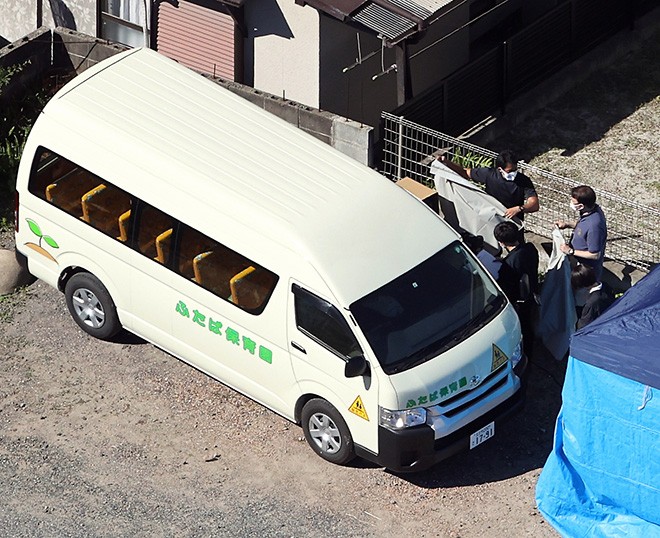 Fukuoka prefectural police on Aug. 5 conduct a test to determine the temperature inside a school bus where a 5-year-old boy was left for nine hours and died of heatstroke in Nakama, Fukuoka Prefecture. (Eiji Hori)

FUKUOKA--In a test, investigative sources concluded that the temperature inside a school bus where a 5-year-old boy was left for about nine hours and died of heatstroke topped 50 degrees Celsius.

Fukuoka prefectural police conducted the experiment following the tragedy that occurred on July 29 in Nakama in the prefecture.

Toma Kurakake boarded the bus as usual in the morning, which arrived at the Futaba nursery school at around 8:35 a.m.

But the driver did not check to ensure that all the children had gotten off and left the boy alone inside. He was found at around 5:15 p.m. The estimated time of death was around 1 p.m.

For the test, prefectural police on Aug. 5 parked a bus in the nursery school’s parking lot under the broiling sun. The doors and windows were shut as police monitored the change in temperature from the morning to the evening.

According to investigative sources, the temperature inside the bus exceeded 40 degrees at around 11 a.m. It later rose past 50 degrees.

According to the Japan Meteorological Agency, Kita-Kyushu’s Yahata-Nishi Ward, a neighboring area of Nakama, recorded the highest temperature of 33.1 degrees at 11 a.m. on July 29.

Police believe the temperature inside the bus rose in the same manner as when Toma was locked inside and the sweltering conditions were unbearable even for adults.

Police will conduct further tests and continue to investigate the case on suspicion of professional negligence resulting in death.

(This article was written by Amane Shimazaki and Akari Sugiyama.)