Nagoya mayor pulls out of Paralympic event over medal gaffe 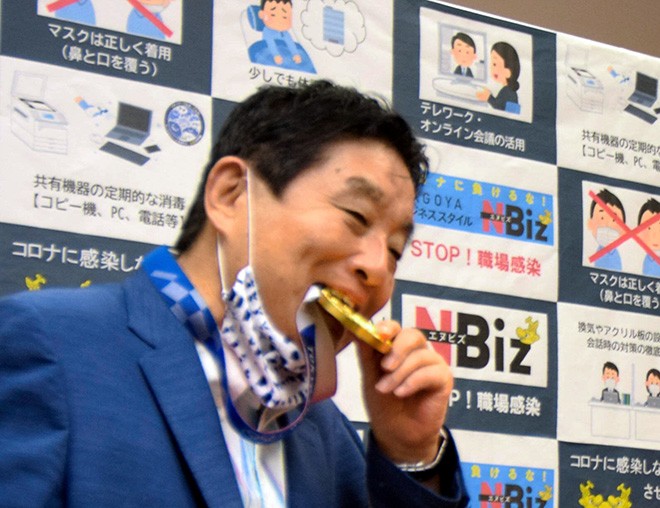 Nagoya Mayor Takashi Kawamura puts an Olympic gold medal between his teeth after softball player Miu Goto showed it off during a courtesy visit at city hall on Aug. 4. (Kenji Seki)

NAGOYA--Nagoya’s mayor is still reeling from a mounting public outcry after he suddenly pulled off his mask and bit into an Olympic athlete’s gold medal earlier this month.

Mayor Takashi Kawamura will no longer be attending the Tokyo Paralympics torch event scheduled for Aug. 15 here, or other similar public events, to “avoid possible confusion,” according to city officials.

Instead, three deputy mayors will represent the city in the events on his behalf.

In the Paralympic torch event, the flame will be brought through six sites in Aichi Prefecture before sending it to Tokyo for the Paralympic Games, which open on Aug. 24.

The officials said Kawamura expressed regrets to the deputy mayors for having to ask them to fill his shoes.

Kawamura, 72, has faced a public relations storm since he abruptly chomped down on a gold medal when Miu Goto, a member of the women’s Olympic softball team, visited city hall on Aug. 4 as a courtesy call.

Goto, 20, is a member of the Red Terriers, a softball team owned by Toyota Motor Corp., an automaker based in the prefecture.

The gesture ignited anger among Olympians, as well as the public, as the medal is not his and biting it was widely seen as inappropriate given the safety protocols against the coronavirus--particularly so with his position as the city’s top leader.

The mayor only added fuel to the fire by saying to Goto, “You should marry a nice guy,” and “Are you prohibited from romance?”

In the face of strong protests online, Kawamura apologized at a news conference the following day for his behavior and his “lack of consideration.” He said he did not mean to harass her.

Toyota issued a statement on Aug. 5, rebuking the mayor’s behavior.

After the automaker protested, the city delivered a letter of apology signed by Kawamura.

But the mayor has not been able to meet with Toyota officials yet to apologize directly.

City hall got an earful over the photo opportunity gone wrong. It received 6,961 emails and phone calls expressing their displeasure with the mayor's actions by the evening of Aug. 10, according to officials.