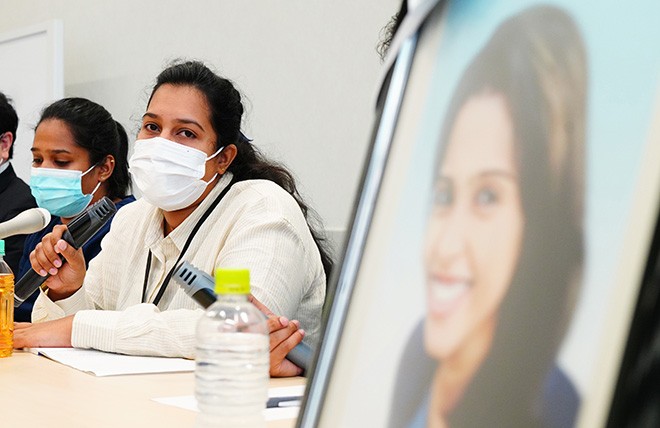 With a photo of the late Wishma Sandamali, her sisters Poornima, second from left, and Wayomi, far left, speak at a news conference in Tokyo on Aug. 10. (Rei Kishitsu)

The bereaved family of a Sri Lankan detainee who died at an immigration facility blasted the final report on her death, released by the Immigration Services Agency of Japan on Aug. 10, saying, “We can’t trust it.”

Wishma Sandamali, 33, died at the Nagoya Regional Immigration Services Bureau in March. The cause of her death has not been released.

“Even before the cause of my elder sister’s death has been revealed, how could this report be final?” Wishma’s younger sister Wayomi, 28, said during a news conference on Aug. 10.

According to Shoichi Ibusuki, a lawyer for the family, an immigration official brought the final report to his office and Wayomi received it.

Even though Wishma fell from her bed, immigration officials let her remain on the floor and ignored her for nearly three hours, the report states.

“Were the officials hired to do such a dirty thing? It must be bullying,” Wayomi said. “This was not the first case. How many people need to die for immigration offices to change their medical care system? Who will take responsibility for their deaths?”

The bereaved family asked the immigration office to release all the recorded video footage of Wishma taken at the facility where she was detained in the two weeks prior to her death.

The immigration office said that in the coming days it will show the family members about two hours of the footage that has been edited.

“Even if it will take a lot of time, we will watch everything and so we want them to release all the footage,” her younger sister Poornima, 27, said.

The sisters said that without help from the Japanese public even the report would have not been released. They said they appreciated the support and asked for the public's continued cooperation to help uncover the truth behind Wishma's death.

The final report admitted that Wishma died of an illness, but also said, “Multiple factors might have affected her death,” and that it was difficult to determine which one was the cause.

The report also said that in hindsight it was "desirable" for Wishma to have been given another medical test since a urine test she had taken in mid-February had shown signs that she had a lack of nutrition and renal dysfunction.

But it also said that the facility's medical care system had limitations such as an absence of full-time doctors.

According to the report, in late February, Wishma, whose health condition had deteriorated, repeatedly asked immigration officials to let her see doctors at an outside hospital, but her requests were not reported to their superiors or doctors.

The report admitted that the local immigration office did not have an adequate reporting system and that its medical care service was not fully available on holidays.

“The immigration office shifted responsibility to the local bureau’s medical care system and its officers’ morality,” Ibusuki said. “It is trying to avoid liability and close this case with light punishments.”

“The immigration office itself investigated the case and released the report, so I don’t know how meaningful it is,” he said. “The related documents should be submitted, and the case should be scrutinized at the Diet based on lawmakers' investigation rights.”

The Immigration Services Agency of Japan conducts an internal investigation in cases where a detainee dies at an immigration facility.

A senior official said that they assess whether to make a case public “based on the importance of the case in question.”

Since 2007, 16 detainees, excluding Wishma, have died at immigration facilities across Japan.

In four cases, the investigation results were opened to the public.