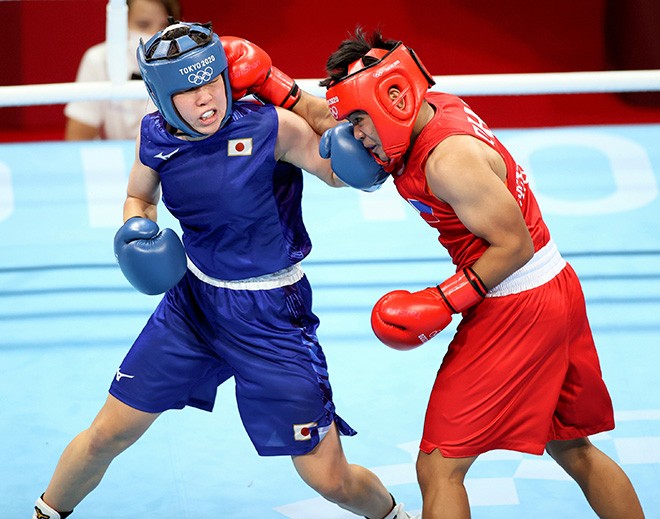 Boxing officials are fighting over sexist comments made by a male TV sports commentator in reference to Sena Irie, Japan’s first female boxer to win an Olympic gold medal.

The Japan Boxing Federation on Aug. 11 said that it has submitted a letter of protest to Tokyo Broadcasting System Television Inc.

The 20-year-old captured the female’s featherweight boxing final at the Tokyo Olympics on Aug. 3.

“There is actually a woman who likes to fistfight?” Harimoto said in the segment.

“What do you get out of watching it?” he continued. “A girl before marriage is trading punches in the face. Some people like a sport like this?!” he said using a belittling term.

The federation took issue with the remarks.

In the letter dated Aug. 10, the federation described Harimoto’s comments as “contemptuous of women and the sport of boxing.”

The letter said that “the sport of boxing is not a mere and violent exchange of punches” and Harimoto’s remarks “denied diversity” in the sport by saying that “women should not compete in such sport because they are women.”

Sadanobu Uchida, chair of the federation, said at a meeting on Aug. 11 that the organization decided to lodge the protest with the broadcasting company to “prevent any misconceptions against female boxers as well as those who love boxing.”

“Our federation has taken a proactive stance to promote women in boxing and appoint women to our executive board,” Uchida said, urging people to treat female boxers “with a little more understanding.”

Japan won a record three medals in boxing at the Tokyo Olympics, with two coming in the women's competition. Besides Irie, Tsukimi Namiki, 22, won a bronze medal in the women's flyweight division.

Irie said at the meeting, “It is a good thing that I have made all my efforts if my medal gets a little child or a housewife interested in women’s boxing, if only a little.

“I want to do my best to help increase the number of competitors, too,” she said.