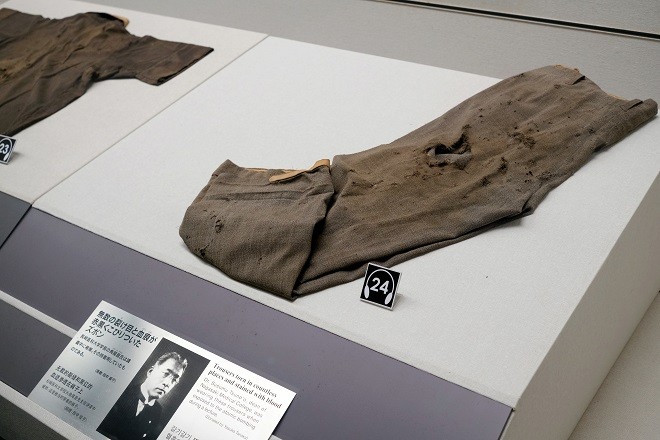 A pair of pants worn by Susumu Tsunoo, then president of Nagasaki Medical College, when the second atomic bomb was dropped is laid down to prevent deterioration while on display at the Nagasaki Atomic Bomb Museum. (Mizuki Enomoto)

NAGASAKI--At the Nagasaki Atomic Bomb Museum every August, Yoshinori Ide puts his hands in prayer in front of an air raid hood on display.

It was worn by his brother, Yoshitsugu, who died in the atomic bombing of the city on Aug. 9, 1945, when he was 2 years and 7 months old.

With not a single photo of his brother left, the hood is the only "proof that he lived."

"At the very least I want visitors to know that there was such a small child who fell victim," said Ide, 75, of Nagasaki, who experienced the atomic bombing while still in his mother's womb.

The hood is among the 15,000 artifacts in the museum's collection, excluding photos and paintings, but only a small portion of them are on display.

Yoshinori's mother, Yae, used to stand in front of the hood to pray for at least 30 minutes with a rosary in her hands until she died in 2010 at age 91.

Her face and arms were badly burned at the time of the bombing. She was left with a painful memory, telling Yoshinori that his brother couldn't recognize her face and died without being able to call out to her.

The artifacts and other materials stored by the museum are kept in a storage facility except when they are put on display for the permanent exhibition, for special events to introduce newly added items and offered for rental to institutions outside the prefecture.

The hood was excluded from the permanent exhibition when the museum initially opened. But in response to Ide's request to return the item should it not be displayed, the museum decided to put it on display only in August.

Seventy-six years after the second atomic bomb was dropped, the museum in the city's Hiranomachi district marked the 25th anniversary of its establishment near the hypocenter.

Shotaro Okuno, 35, the only curator at the museum, has been seeking ways to prevent the atomic bomb artifacts from deterioration and to satisfy the survivors who provided the items.

In or around 2012, Okuno realized something was wrong with a pair of pants hanging in the permanent exhibition room.

The threads were beginning to fray.

The pants were worn by Susumu Tsunoo, then president of Nagasaki Medical College (present-day Nagasaki University's School of Medicine) about 700 meters southeast from the hypocenter, at the time of bombing. Showered with a great number of glass fragments after the blast, the pants have a countless number of tears and rips and are covered with bloodstains to show the ferocity of the bombing.

The clothing piece was donated to the museum's predecessor, the Nagasaki International Culture Hall, in 1985.

Okuno thought about mending the pants using Japanese traditional "washi" paper and other materials, but he was worried about the risk of making alterations. After looking into every option, the curator decided to lay the pants down for display rather than hang them.

Okuno was appointed as the museum's first curator in 2008.

He was studying at Kumamoto University, specializing in medieval history. But he returned to his hometown after being encouraged by his teacher who told him that hundreds of thousands of visitors would come to see the exhibits.

"I have been raised by hibakusha," Okuno said, referring to atomic bomb victims.

The museum had hired no curators, citing that it wasn't established under the Museum Law. But with the survivors becoming advanced in years, the city government decided to recruit Okuno.

Another curator who was hired in 2015 resigned the post in spring this year, leaving Okuno the only curator until a replacement is found.

Although Okuno has been making various efforts to prevent deterioration, including introducing LED lights to reduce damage to the exhibits, he still has many concerns.

"It is impossible to prevent paper and cloth from changing over time. I'm caught in a dilemma of doing nothing and adding irreversible changes," he said.

The Hiroshima Peace Memorial Museum has eight curators. After reopening in 2019, it also hammered out a plan to replace exhibits every year to prevent A-bomb artifacts from deterioration.

The Nagasaki museum, meanwhile, added new photos and introduced projection-mapping technology in 2016. However, about 420 artifacts on display remain almost unchanged since its opening.

Envisioning an "age with no hibakusha" that is soon to come, the city government is scrambling to collect new materials.

Last year, officials sent letters to about 25,300 residents who hold the official designation as hibakusha, asking them to donate related items.

They received various materials such as disaster certificates showing the deaths of six members of a family.

The scope of the curator's job is expanding outside the museum.

In 2016, the hypocenter, the former Shiroyama National Elementary School and other ruins were designated by the central government as historical sites.

Okuno is in charge of preserving and maintaining those sites, in addition to conducting research for additional designations of other sites and studying trees that survived the bombing.

"Now is the last chance to study with hibakusha and share the values that should be passed down to the next generation," Okuno said. "I want to sow a lot of seeds."

In fiscal 2020, the city government decided to increase the number of curators to three to enrich and pass down the exhibits.

"The role of the curators will become increasingly important because they must continue to learn display methods that reach to those who have no experience of the atomic bombings," Nagasaki Mayor Tomihisa Taue said. "We will recruit them properly and take over the legacy."