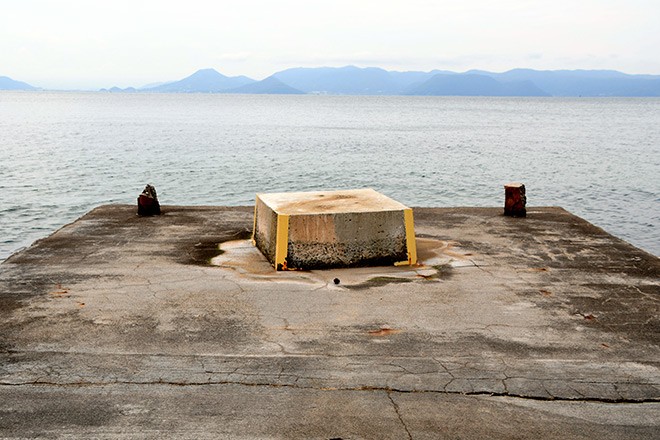 A pier where Yayoi Kusama’s “Yellow Pumpkin” used to stand on Aug. 11 in Naoshima, Kagawa Prefecture. The artwork was washed away by Typhoon No. 9 on Aug. 9. (Akari Kamiya)

NAOSHIMA, Kagawa Prefecture—Officials here are racking their brains over how to reinstall Yayoi Kusama’s “Yellow Pumpkin,” a tourist-luring piece of art that was badly damaged when it was washed away by Typhoon No. 9.

“We are currently checking its broken condition and are reviewing if it can be restored to its original state or whether it should be recreated anew,” a representative of Benesse Holdings Inc., an education-related company that owns the artwork, said.

The pumpkin, 2 meters high and 2.5 meters wide, was installed at the tip of a pier jutting into the sea in 1994.

It has been a major sightseeing attraction of Naoshima, an island town in Kagawa Prefecture known for its art collection.

According to Benesse, staff members normally hold meetings when a typhoon approaches the island to discuss if they should “evacuate” artwork displayed outdoors, including Kusama’s creations.

But a typhoon alert was not issued on the morning of Aug. 9. The rain and wind weakened, so staff decided not to move the pumpkin.

However, the wind picked up speed around 10:30 a.m., and the employees, sensing danger, rushed to check on the “Yellow Pumpkin.”

By then, it was too late to safely relocate the artwork, the company said.

The harsh weather loosened the bolts anchoring the pumpkin to the pier. The artwork fell into the sea and crashed repeatedly into the pier before it was carried away by the waves.

It broke into three pieces, which eventually washed ashore and were retrieved by the employees around 11 a.m., the company said.

The damaged pumpkin has since been stored at the Benesse Art Site Naoshima.

But even with the absence of the pumpkin, the old pier is still attracting sightseers.

Visitors sat on the empty base that used to anchor the pumpkin and took pictures on Aug. 11.

A 24-year-old woman who lives in the prefectural capital of Takamatsu traveled to the island to see the site.

“This is my first time to come to Naoshima,” she said. “I feel sad because I wanted to see the (pumpkin).”

Those in Naoshima hoping to view Kusama’s work can still see her “Red Pumpkin,” and even enter it.

The artwork, 4 meters high and 7 meters long, was installed at Miyaura Port, a gateway to the island, in 2006.

It was busy with visitors on Aug. 11.

A town official in charge of managing the red version said the artwork is located inside a harbor, so there is no need to move it when a typhoon approaches.

“I don’t think it would get swept out to sea unless something very unusual happens,” the official said.