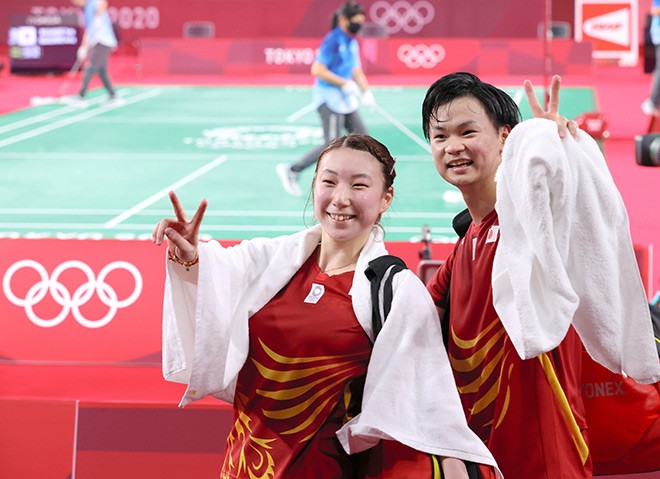 Arisa Higashino, left, and Yuta Watanabe give a V sign after defeating a Hong Kong pair in the badminton mixed doubles in the Tokyo Olympics on July 31. (Hikaru Uchida)

Japanese media portrayals of male and female athletes competing in the Olympic Games still exhibit gender bias despite making progress in the past, according to researchers who examined TV coverage of Olympians.

Reports carried by Yahoo! News, which is an online news portal that aggregates stories from 500 TV, print and other media outlets, relied on different words to describe male and female athletes, the analysis shows.

Three days after the July 23 Opening Ceremony of the Games, Imoto, who serves as an adviser to the Tokyo Olympic organizing committee on gender equality promotion, said at a news conference that women are clearly still treated unfairly in coverage.

“Media tend to discuss their looks and private lives, rather than portraying them as full-fledged athletes,” she said.

Imoto was a member of Japan’s swim team at the 1996 Atlanta Olympics.

Following her stark assessment, the Asahi analyzed Japanese media coverage of athletes to find out if there was a disparity in how men and women are talked about at the Games. It looked at the frequency of words used to portray them by using text analysis software.

Around 33,000 reports were published by Yahoo! News from July 21, when some competitions began, to Aug. 8, the final day of the Tokyo Olympics.

The study looked at common expressions used in stories to describe male and female Olympians and counted how often these expressions were used.

As for “cute,” the expression was used 206 times for stories on female athletes. For male athletes, it was 100 times.

Naomi Kobayashi, associate professor of sports reporting and gender at the Aichi University of Technology, said there was a steady reduction in gender-biased language overall in how competitors were covered during past Summer Games.

Her research showed that in the Beijing Games, 60 percent of comments about good looks appeared in reports on female athletes and the rest on males.

But the Rio Games was a different story, with male athletes treated like celebrities. References to men’s appearances jumped to 80 percent, while the corresponding figure for women came to 20 percent.

Kobayashi said she is still analyzing media reports from the Tokyo Olympics, but her initial impression is that there were fewer references to female athletes’ appearances compared with past Games.

Still, some broadcasts were questionable in the light of how gender equality was set out in the International Olympic Committee’s Portrayal Guidelines, she pointed out.

For example, a tabloid TV show by a major network broadcast a feature on the procession of athletes during the Opening Ceremony under the title of “Attractive men and women from overseas are in the spotlight.”

The program included shallow comments about the physical appearance of Kazakhstan’s female triple jumper Olga Rypakova, who drew attention in part due to her clothing.

“She drew enthusiastic response from the public as she looked like a princess. In a big surprise, however, she is 36 and a mother of two children.”

Kobayashi said the show may have violated the Portrayal Guidelines, which state, “Do not focus unnecessarily on looks (e.g. make-up, hair, nails), clothing or intimate body parts (e.g. crotch shots, cleavage, backsides), especially if it does not relate to an athlete’s performance.”

A female employee in her 40s working for the network acknowledged that “workers have yet to update their understanding of gender equality.”

“Some programs shed more light on female athletes’ looks and personal lives, while others appeared to be based on stereotypes,” Kobayashi said. “Media should pay respect to individual athletes and heighten their awareness of how to protect their human rights.”

In another tabloid show, a TV personality asked Arisa Higashino and Yuta Watanabe, who placed third in the badminton mixed doubles in the Tokyo Olympics, during their appearance on the program how they felt after defeating their opponents.

“You both looked so happy that you will become an item,” the personality said of the pair’s embrace after their victory. “How did you feel?”

Masami Tanaka, a breaststroke swimmer who won a bronze medal in the 2000 Sydney Olympics, called for reporters to focus on how athletes made it to the Games regardless of their gender.

“They should convey how grueling it was for the athletes to get there and the excitement of competing on a global stage,” she said.

The IOC Portrayal Guidelines also set out that media should avoid using “passive, sexy imagery of sportspeople, which reinforces stereotypes;” ensure that there are “not significantly more images of one gender or community” than another; and that media personalities should use “bias-free language” and avoid gender stereotypes along with “expressions or words that compare women to men and/or imply the superiority of one gender over the other.”