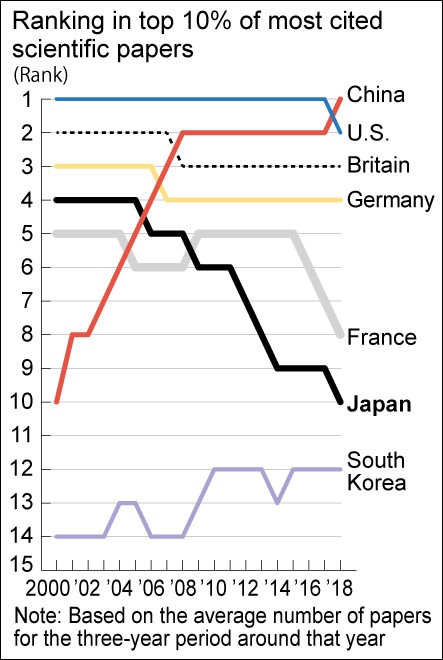 China has overtaken the United States for the first time in the number of noteworthy scientific papers it produced, while Japan has dropped to 10th place after India.

The National Institute of Science and Technology Policy, affiliated with the ministry, calculated the rankings based on the top 10 percent of the most cited scientific papers in each research field and other factors.

While Japan accounted for an average of 3,787 of the those papers between 2017 and 2019, the figure is around 10 percent of that for China and the lowest among Group of Seven industrialized countries.

A country's contribution to a thesis is calculated on the basis of which institution the article’s co-authors belong to.

Japan’s ranking has been on continuous decline since the mid-2000s, when the country stayed in fourth place. Japan performed especially poorly in the fields of environment and geoscience, engineering, and computer science and mathematics.

Japan has 680,000 scientists and spends 18 trillion yen ($163.03 billion) on research and development in the public and private sectors combined, ranking third only after the United States and China.

China, which used to rank 10th or lower in the top 10 percent papers list, started improving its performance in the late 1990s and came second only to the United States in the late 2000s.

China has 2.11 million scientists and spends 55 trillion yen on research and development, both triple the levels of Japan, giving its academic community the momentum to stay ahead of the game.

Noteworthy theses are increasingly released as a result of joint studies with researchers from other countries.

The ratio of such articles is 35 percent for Japan, compared with more than 60 percent for Britain, France and Germany.

The number of Japanese researchers visiting the United States for their study is only around 40 percent of that about 10 years earlier.