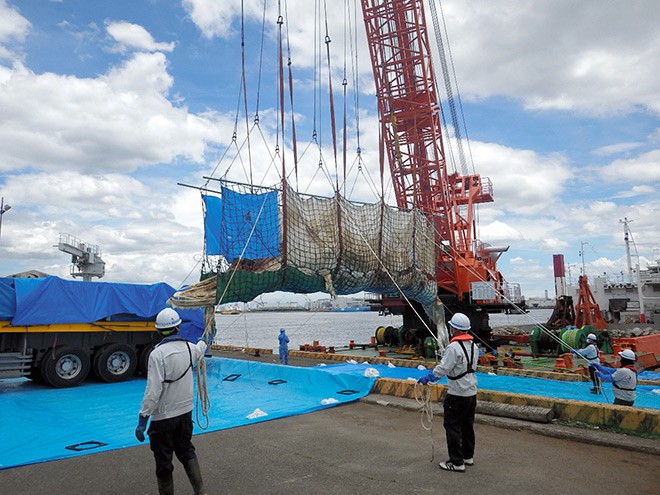 OSAKA--When a massive dead whale was found drifting in Osaka Bay, local authorities took the rare step of burying the carcass, rather than cremating it, to harvest the skeleton for display at a museum.

The operation was undertaken in July by the Osaka Ports and Harbors Bureau to allow the flesh to break down naturally over a period of about two years.

According to the Institute of Cetacean Research, which studied the carcass, the male whale was 11.21 meters long and weighed about 8.5 tons.

The remains may be from an Eden’s whale, a species known as katsuo kujira (bonito whale) in Japan because of the tendency of bonito to gather around these whales as protection against predators.

“Details of the species’ ecology, such as the habitat and breeding grounds, remain unclear,” said Tsutomu Tamura, head of the institute’s bio-resource department. “If we can preserve a skeleton specimen, it will prove to be rare research material in Japan.”

The carcass was already in an advanced state of decay so it was impossible to pinpoint the cause of death or its age. The animal could have been washed by currents into Osaka Bay after it died outside the bay, according to the institute.

The carcass was buried in an area in Sakai, Osaka Prefecture, under the jurisdiction of the Osaka prefectural government on July 17-21. The project, which required the use of a crane and a large truck, is estimated to have cost about 10 million yen ($90,600).

The skeleton will be retrieved once the flesh has rotted off. Animal carcasses are sometimes treated with chemicals to remove the flesh, but the whale was too big to be processed that way.

The specimen will be kept at the Osaka Museum of Natural History, which has skeleton specimens of a sperm whale and a humpback whale that turned up in Osaka Bay.

According to the museum, it was the first time in 31 years for a whale carcass longer than 10 meters to be found in Osaka Bay since the 1990 discovery of a 19-meter-long finback.

“We want to amass skeleton specimens so people can learn what kinds of whales are visiting Osaka Bay,” said Takeshi Wada, the museum’s chief curator.

The whale was first spotted by a Japan Coast Guard patrol vessel off Awaji, Hyogo Prefecture, on July 8.

A speedboat service linking Kansai Airport and Kobe Airport was forced to curtail operations for safety reasons on July 10.

The Osaka Ports and Harbors Bureau hauled the whale with a vessel to Hannan Port in Kishiwada, Osaka Prefecture, on July 11.