VOX POPULI: Someone else’s virus nightmare today could be yours tomorrow 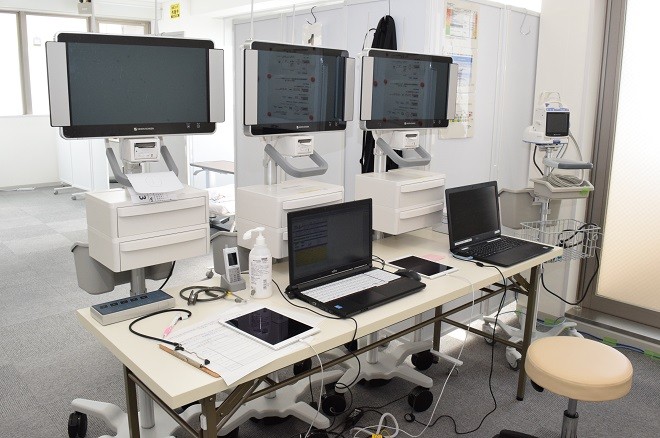 The Tokyo metropolitan government recently set up a station for COVID-19 patients waiting for being hospitalized. The facility in Katsushika Ward has equipment to monitor oxygen saturation levels in patients’ blood. (Asahi Shimbun file photo)

This is the story of a family of five--parents, two sons and one daughter--living in the Greater Tokyo Area.

One night in early August, the younger son, who is 19, muttered, "Uh-oh. This isn't good."

Within moments, his temperature soared close to 40 degrees. The day before, he'd started feeling as if something was stuck in the back of his throat.

The following morning, the mother, who is in her 40s, drove her listless teen to a nearby clinic, where he was asked about his condition and then given a polymerase chain reaction (PCR) test.

The entire process, including paying for the visit, took place in the car.

Back at home, the daughter started running a fever, followed immediately by the older son. The latter's fever broke quickly, but his sense of taste was gone.

"Coffee became water," as he put it.

The entire family, including the father, a civil servant, had been meticulous about following safety measures. But unable to determine who was the first to get infected, they were at a loss.

A midnight telephone call from the younger son's doctor confirmed that he had tested positive for COVID-19. As the doctor sounded exhausted, the mother felt sorry and did not have the heart to ask further questions.

The son's condition deteriorated one week after the diagnosis. His blood oxygen level registered 92 percent, which was serious even though his overall symptoms put him in the "moderately ill" category.

Still, the local "hokenjo" health center maintained that "even people with a blood oxygen level of 89 percent could not be hospitalized," and told the parents that if their son needed a chest CT scan, they should go online to find a hospital.

The parents felt abandoned by the medical system.

They kept their three children isolated in their rooms, disinfected the entire house and kept it ventilated around the clock.

"My son's temperature and blood oxygen level fluctuated violently, and I was worried sick," the mother recalled.

Unable to avoid going into her son's room every day, she came down with a fever on the morning of the 10th day.

Her husband, who remained the only asymptomatic member of the family, lamented, "We have faithfully followed every imaginable safety protocol. And now this."

This family's nightmare is now spreading around the nation every day.

People living with their families groan in resignation, "How on earth are we supposed to stop in-home infections?" And those living alone are terrified of the consequences of their condition taking a sudden turn for the worse.

We are now faced with the gravest crisis since the pandemic started a year and a half ago.

"Today you, tomorrow me," goes an old Japanese saying. This has never sounded as compelling as it does this summer.