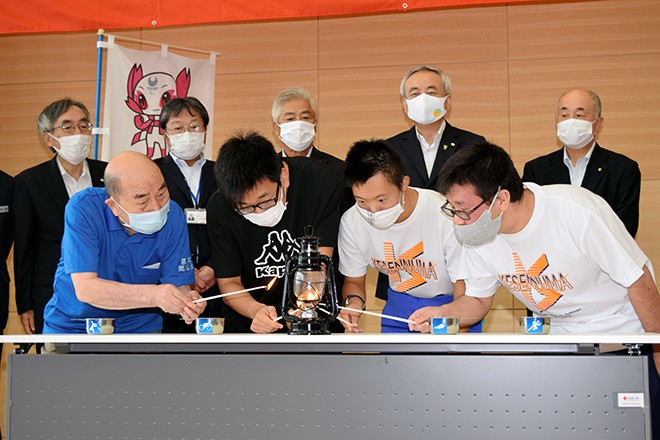 With hopes for a successful and safe Games, the Paralympic flame lighting ceremony was held in many parts of the Tohoku region on Aug. 12, starting the 12-day countdown to the Opening Ceremony.

The city was hit hard by the tsunami triggered by the 2011 Great East Japan Earthquake.

Takuto Kajiwara, 17, said he hopes the Tokyo Paralympics provides an upsurge of public interest as the Tokyo Olympics did.

The torch was lit by the eternal flame in memoriam of victims from the 2011 disaster.

Kurosawa, who was born with disabilities, lost his home and friends in the 2011 disaster.

He gave up playing sports but town government employees encouraged him to try again. In 2018, Kurosawa competed in a shot putting competition and other events at a national tournament.

“I hope the flame rejuvenates (the athletes) and they do great,” Kurosawa said.

Another ceremony was held at the J-Village, located in Naraha and Hirono towns in Fukushima Prefecture.

Satoshi Sato, 45, who competed in the 2008 and 2012 Paralympics as a wheelchair basketball player, and Haruka Saito, 16, who attends a prefectural special-needs school in Minami-Soma, participated in the event.

The Tokyo Olympics torch relay started at the J-Village in March.

Sato said he hopes “people around the nation understand that Fukushima has recovered.”

About 880 local governments are expected to hold flame lighting ceremonies for the Tokyo Paralympics, which starts on Aug. 24

(This article was written by Yusuke Hoshino, Ryohei Miyawaki and Nobuyuki Takiguchi.)