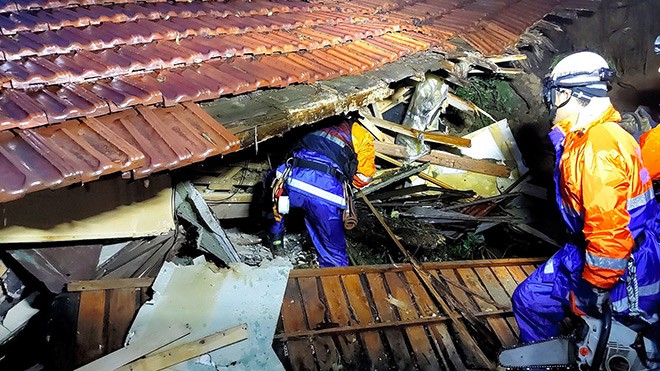 More heavy rain is forecast for western Japan after record-setting downpours triggered landslides and flooding that killed at least one person in the Kyushu region.

A landslide early on Aug. 13 in Unzen, Nagasaki Prefecture, damaged at least two homes. An unconscious woman was found in one of the homes by rescue workers. Her death was later confirmed at a hospital.

Her husband and daughter lived in the same home, and their whereabouts were not immediately known.

The Japan Meteorological Agency issued a special heavy rain warning for Hiroshima Prefecture at 8:45 a.m. on Aug. 13, saying unprecedented rainfall was expected in the area.

Although the special warning was downgraded to a heavy rain warning at 1 p.m., the Gonokawa and Suzuharikawa rivers that run through the city flooded due to the rain.

Other rivers running through Hiroshima city were close to overflowing their banks, leading to the special heavy rain warning and evacuation orders.

The rain front is expected to remain stalled over Japan, and rain is forecast for the next week or so.

Heavy rain is again forecast for western Japan on Aug. 14, but the range is expected to expand further east to the Kinki, Tokai and Kanto-Koshin regions.

For the 24-hour period until 6 a.m. on Aug. 14, the JMA is forecasting: 300 mm of rain in northern Kyushu; 250 mm in the southern Kyushu, Shikoku, Kinki, Tokai and Kanto-Koshin regions; 200 mm in the Chugoku and Hokuriku regions; and 120 mm in the Tohoku region.

The rain is not expected to let up on Aug. 15. Similar heavy rainfall forecasts have been made for the following 24 hours.