The sisters of a Sri Lankan woman who died in detention address reporters on Aug. 12 after watching video footage of her at an immigration detention facility. (Chihiro Ara) 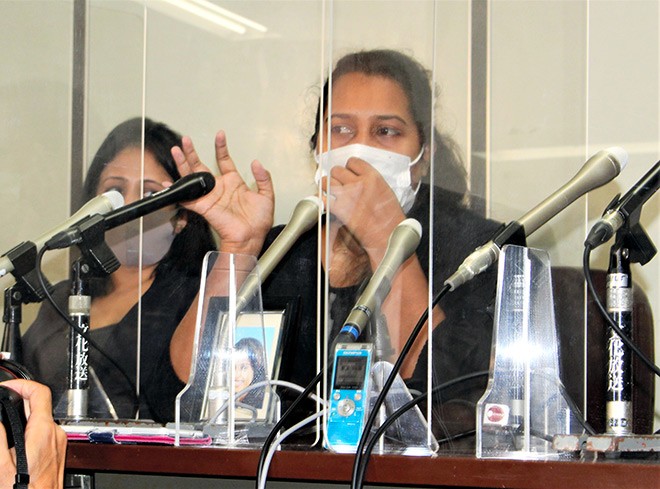 The sisters of a Sri Lankan woman who died while in detention finally viewed the video showing her final days of life, but they were too shocked to watch it to the end.

Wishma Sandamali, 33, died in March at a detention facility run by the Nagoya Regional Immigration Services Bureau after suffering from severe nausea and experiencing difficulty walking. She was detained last August after overstaying her visa.

Officials allowed security camera footage that had captured Wishma’s time in detention to be shown to her sisters Wayomi and Poornima, who are visiting Japan, on Aug. 12.

“I feel officials treated my sister like an animal and killed her,” Wayomi, 28, told reporters after watching the footage. “They didn’t take any humanitarian response. Every non-Japanese should watch it.”

Officials at the Immigration Services Agency edited 13 days’ worth of video recorded up to her death on March 6 down to just two hours.

But the sisters had to stop watching the footage after about 70 minutes from their dismay at witnessing Wishma grow weaker day by day while immigration officials laughed as they took care of her. The sisters will watch the rest at a later date.

“It was clear to all that my sister’s condition was getting worse,” said Poornima, 27. “Officials treated her like a nuisance and didn’t show any respect for her as a person. They have no heart.”

The bereaved family said at a news conference that the footage of Wishma on Feb. 26 shows her falling out of her bed and asking for assistance 23 times in tears over the intercom.

But she was told by an official that she should get up on her own.

The family said the footage also shows that the official subsequently came to check on Wishma, but told her to lift her hip and shoulders and did nothing but pull on her hand. When Wishma said she felt cold, the official put a blanket over her and left her lying on the floor.

Despite that Wishma required assistance to move about, in another scene, the officials taking care of her said with a laugh that she was heavy, according to the family.

The Immigration Services Agency had repeatedly rejected requests from the bereaved family and opposition lawmakers to release the footage. The agency cited security reasons, the need to protect Wishma’s honor and dignity, and prevent the footage from affecting the third-party panel investigating her death.

But then on Aug. 10, when the final report on the case was released, Justice Minister Yoko Kamikawa instructed the agency to disclose the footage to the bereaved family to “give consideration to their feelings.” Kamikawa reportedly met with the bereaved family on Aug. 12 and offered an apology.

Wayomi and Poornima asked the agency to provide them copies of Wishma’s entire video record so they can show it to her mother once they return home. But that request was turned down.

The agency would only show the footage to the two sisters and their interpreter, and ultimately rejected their request to allow the family’s lawyer to watch it with them.