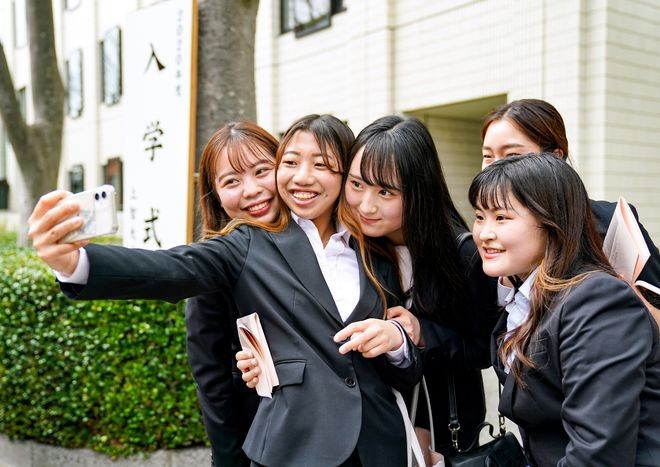 New sophomores at Sophia University pose for photos and chat at their entrance ceremony, which was delayed a year and held on March 30 in Tokyo’s Chiyoda Ward. (Tsubasa Setoguchi)

A large number of Japan's college students report having endured serious psychological health issues as a result of the prolonged pandemic, including depression, loneliness and decreased motivation, a new survey shows.

Sophomores, who have been able to attend few classes in person since entering universities in spring last year and have rarely had opportunities to meet others in their age group, emerged as especially impacted by the fallout from the health crisis.

That's among the findings of the survey on campus life conducted by the National Federation of University Cooperative Associations.

“One time I couldn't get out of bed for three days or so,” said Naoki Aoshima, a second-year student at Meiji Gakuin University, who attended a news conference to announce the findings. A friend of his has developed a psychological disorder, he added.

Results of the online survey were released on Aug. 10. The survey, conducted in July, covered 7,637 university students.

Respondents were asked what they are anxious about and could choose multiple answers. While 66.7 percent of all the students selected the answer “anxiety about the future,” the figure rose to 74.1 percent among sophomores.

A total of 45.3 percent of students overall said they “feel like doing nothing out of laziness,” while 51.4 percent of second-year students said they felt that way.

Respondents who said they were “depressed” accounted for 41.6 percent of students overall and 47.1 percent of those in their second year.

A total of 33.0 percent of all students and 39.2 percent of sophomores said that they feel “lonely and restless about not being connected to friends.”

The survey also covered thoughts of suicide and feelings of alienation among students, with 19.5 percent of all respondents saying they “do not want to live anymore,” and 22.7 percent of sophomores answering that way.

Sophomores with fewer than five friends accounted for 35.1 percent, far more than 31.2 percent for freshmen and some 19 percent for juniors and seniors.

A total of 7.3 percent of second-year students had no friends, compared with 5.8 percent of freshmen.

As many as approximately 40 percent of the surveyed students answered that they want college operators to “create chances to build links with classmates within campus,” “resume and promote after-school activities (of social circles and clubs)” and “offer opportunities to form connections with college superiors inside campus.”

The questionnaire also came with a comment section where people could open up about their experiences with anxiety.

Opinions from sophomores included, “I tackled doing homework at midnight while sobbing in depression” and “I even think I should not have entered college.”

“What relationships you can build differs greatly depending on whether one has in-person classes, and this forces people who do not often come (to campus) to be increasingly isolated,” another second-year student pointed out.

One senior asked for “help because I just spend days in a small apartment to protect myself from the coronavirus so it is difficult to maintain my psychological health.”

“I have no part-time shifts and therefore no money so I can't refresh myself by eating out,” a junior wrote. “My assignments make it impossible for me to spend time with friends, so I'm always depressed and can't sleep soundly at night or wake up in the morning.”

Shigeru Yamamoto, a specially appointed professor of support for young people at Taisho University, who is knowledgeable about measures to stop students from dropping out of school, called on university operators to take steps over the issue.

“Colleges should take advantage of the internet to hold online sessions in small groups with the main objective of helping people build connections with each other," Yamamoto said.

“To improve training programs for lecturers, it's also important to pick up good examples, such as having teachers write comments on essays the students submit when they return them so students can improve,” he added.

(This article was written by Hajime Ueno and Senior Staff Writer Fumio Masutani.)