No hospital beds available for hundreds of very sick patients 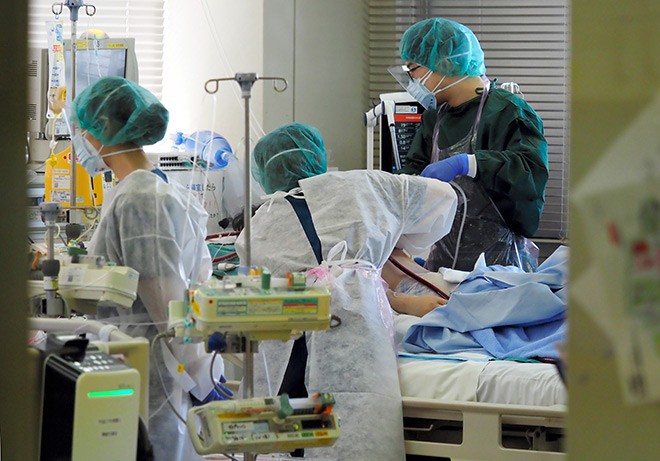 An explosive surge in COVID-19 cases has left hundreds of seriously ill patients in the greater Tokyo metropolitan with little or no prospect of receiving hospital treatment as beds are basically filled to capacity.

The health ministry reported a record number of COVID-19 patients with serious symptoms, many of whom are being treated in intensive care units.

It said 1,478 patients showed severe symptoms on Aug. 12, surpassing the previous record of 1,413 set at the peak of the fourth wave of infections in spring.

Hospital beds for patients with serious symptoms were almost filled in Tokyo and its three neighboring prefectures of Chiba, Kanagawa and Saitama as well as Okinawa, the nation's southernmost prefecture.

The Tokyo metropolitan government does not automatically include COVID-19 patients in ICUs as having serious symptoms, so it said there were only 218 serious cases requiring ventilators or extracorporeal membrane oxygenation, also known as an ECMO lung bypass machine, as of Aug. 12.

But using the health ministry definition gave Tokyo a total of 947 patients with serious symptoms as of Aug. 11.

And the pace at which serious patients are increasing has also accelerated.

During the fourth wave, it took 53 days for the number of seriously ill patients to reach the 1,400 mark from 400. But this time around, it took just 20 days.

Authorities also reported explosive growth in new cases among those still not vaccinated. About 70 percent of patients with serious symptoms in Tokyo are under the age of 60, officials said.

The ratios at which hospital beds for patients with serious symptoms were filled as of Aug. 12 hit 81 percent in Tokyo and 96 percent in Kanagawa Prefecture, according to statistics compiled by the Cabinet Secretariat.

But an official in Kanagawa coordinating the transport of patients to hospitals said hospital beds were being immediately filled once patients are discharged.

A Tokyo official handling hospitalizations said 75 requests were submitted by patients with serious symptoms on Aug. 10, but no hospital beds were available that day for 50 of them.

Chiba Governor Toshihito Kumagai expressed fears of an “invisible natural disaster” in the making while talking to reporters Aug. 12, noting that the general public seems to be oblivious to the unfolding crisis that has overwhelmed the medical care structure.

While 40 percent of hospital beds for patients with serious symptoms in Chiba are still available, Kumagai said the actual situation was one in which all beds were essentially taken since those still open were being prepared for hospitalized patients with moderate symptoms that suddenly worsen.

(This article was compiled from reports by Yoshinobu Motegi, Momoko Ikegami, Kyoko Takamuro and Taro Ono.)