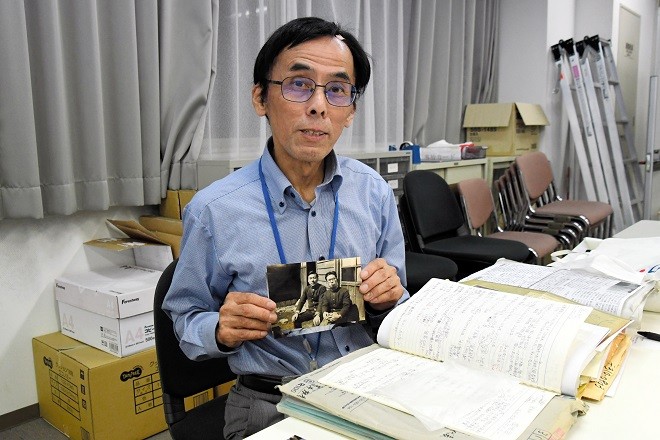 Kunihiko Osone poses with a photo of his father, Tetsuzo, in Mito on July 30. (Shun Hayashi)

MITO--Kunihiko Osone was startled when his son, who was in third grade at the time, came to him with a blunt question about his family’s past.

“What was Grandpa doing during the war?” his son asked him.

The deceptively difficult question was part of a school homework project that was assigned over the son's summer vacation.

“Well, he was a student soldier,” said Kunihiko, 62, a resident in this capital of Ibaraki Prefecture. That was all he could muster as an answer at the time, now 11 summers ago.

But because his son asked that one seemingly simple question, he would soon unearth information about his father’s past that would forever alter his own identity.

Kunihiko always felt that there was a deep rift between himself and his father, Tetsuzo.

Tetsuzo seldom talked about the war or about himself. He only told Kunihiko that he should go to a prestigious high school.

Kunihiko chose to go to Tokyo to attend university, a decision that almost felt like he was running away from home. He became a social worker and had two children.

More than 30 years from that time, Kunihiko could not let go of the fact that he could not really answer his son’s question.

He developed a burning desire to be able to answer it, so he obtained a copy of his father’s military service record from the Ibaraki prefectural government.

Tetsuzo had only told him that he was in the cavalry.

But his military service record showed something totally different. He had been in the First Shipping Artillery Regiment.

That summer, Kunihiko went to Hiroshima. He visited there three years in a row and sought out his father’s former comrades from his military unit.

Kunihiko learned that his father, an army medic in the Akatsuki unit, entered Hiroshima on Aug. 7, 1945--the day after the atomic bomb was dropped on the city--and was exposed to radiation there.

Medical drugs and other supplies were unavailable at the time, so his father likely had to carry bodies on a bicycle-drawn cart.

Kunihiko was shocked to learn Tetsuzo was so loath to talk about that experience that he had lied about it.

He also thought, at the same time, that his own low blood production, which doctors diagnosed him with at health checkups starting in his 40s, may have to do with what his father experienced.

So, he set out to learn about his father’s story.

A man from an army battery next to Tetsuzo’s unit spoke to Kunihiko but refused to talk about one thing: what Hiroshima looked like at the time.

Kunihiko also visited the Hiroshima Peace Memorial Museum with his son and daughter. He said he fell into deep thought in front of a miniature model of the city, which had been reduced to rubble immediately after the atomic bombing.

“Was my father here?” he asked himself.

Kunihiko began to think of himself as a second-generation atomic bomb survivor--an identity he did not have when he visited Hiroshima earlier in life, when he was 20.

“I came to embrace an earnest desire to learn about what really happened,” Kunihiko said. “I want to know why my father had to be exposed to the atomic bomb’s radiation.”

And he wanted to learn even more. Further research revealed that his father was put up for adoption in his childhood. He was unable to attend the school or land the job he wanted. At one point when he was a university student, he became the head of a newspaper club.

Kunihiko’s feelings toward his father, which verged on hatred, began to gradually thaw.

“I wish I had talked to him more,” he said he thought at the time.

Kunihiko compiled his findings about his father into a memoir for posterity, so he can pass down the records he collected, and his father’s story, to his grandchildren.

He now hopes that with his discovery, he can add his voice to the chorus of people calling for world peace.

“An outsider like myself is not well-positioned to tell people that there should be no war,” Kunihiko said. “However, if I was given this opportunity to tell that to people in the capacity of a second-generation atomic bomb survivor, I think I almost have a responsibility to do so.”