Eight found after landslide in Nagano; mother and 2 sons dead

Muddy water flows into a residential area of Hiroshima’s Asa-Minami Ward after heavy rain triggered a mudslide on a nearby mountain slope Aug. 14. (Video by Tabito Fukutomi) 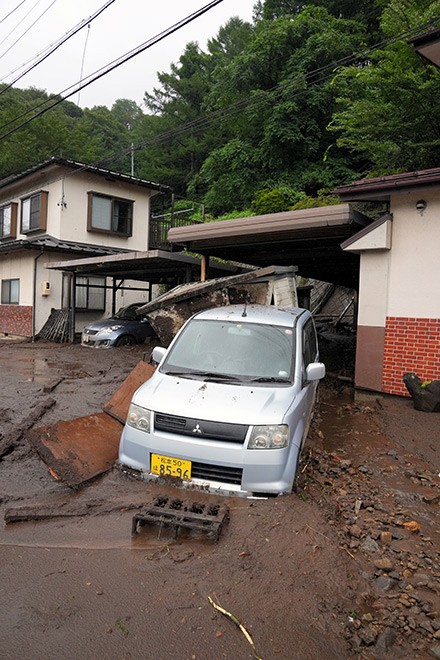 A vehicle is pushed out onto the road from a home where soil and sand flowed into in Okaya, Nagano Prefecture, on Aug. 15. (Takuya Isayama)

The victims, Yuki Makibuchi, 41, and her second and third sons, 12 and 7, had shown no vital signs after the early morning landslide near JR Kawagishi Station.

The survivors included Makibuchi’s husband and her first son, who both suffered minor injuries.

A member of a volunteer fire party near the scene of the landslide alerted the Suwa cross-regional fire department headquarters in Okaya around 5:25 a.m. that three people were left stranded on the second floor of a house there.

Record rainfall continued to pound western Japan and elsewhere on Aug. 14 due to a stalled front over the main Japanese islands.

The Japan Meteorological Agency (JMA) forecast continuing atmospheric instability Aug. 15 and urged residents to remain alert to the dangers of a possible disaster.

In Nagano Prefecture, the most serious level 5 warning was issued for residents in part of Azumino city to ensure their safety.

In addition, 74,000 or so residents in Nagano and Matsumoto were ordered to evacuate.

Record rainfall levels were recorded in Nagano and Gifu prefectures on Aug. 15 after the rain front expanded from western Japan to cover the Tokai and Kanto-Koshin regions.

The JMA downgraded a special alert for heavy downpours to an alert for Fukuoka, Nagasaki, Saga and Hiroshima prefectures on the morning of Aug. 15 after a lull in the rain in northern Kyushu and the Chugoku region.

However, the agency forecast that the front will move northward on or after Aug. 16 and stall there, increasing the likelihood of torrential rains across broader areas toward Aug. 20. Officials warned residents in those areas to remain vigilant.

Ryuta Kurora, chief of the agency’s Forecast Division, urged residents to stay alert during an emergency news conference on Aug. 15.

“Landslides are bound to occur even with a slight amount of rain in the coming days as the ground is already loose with record rainfall over the past few days,” he said.