Japan ekes out economic growth in recovery from pandemic 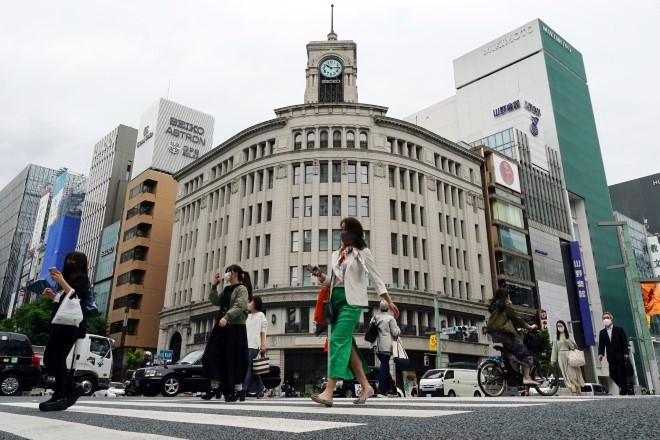 In this May 11 file photo, people wearing protective masks to help curb the spread of the coronavirus walk at the Ginza shopping district in Tokyo. (AP Photo)

Japan’s economy grew at an annual rate of 1.3 percent in the last quarter, raising hopes for a gradual recovery from the painful impact of the coronavirus pandemic.

The Cabinet Office reported Monday seasonally adjusted gross domestic product, or GDP, the sum of the value of a nation’s products and services, grew 0.3 percent in April-June, marking a reversal from the 0.9 percent contraction in the previous quarter for the world’s third-largest economy.

The annualized rate is how much the economy would have grown or contracted had the on-quarter rate continued for a year.

Underlining growth for April-June in Japan were private consumption, rising at an annual rate of 3.4 percent, and private residential investment, which grew at an 8.6 percent annual rate.

Exports jumped at an annual rate of 12.3 percent, as Japan benefited from the ongoing overseas economic revival from the pandemic damage. Imports surged 21.9 percent.

Some analysts had expected the Japanese economy to continue to contract, given recent negative data about housing and investments.

Uncertainty remains because of the rising cases of COVID-19 infections in Japan, which has a vaccine rollout that’s among the slowest for industrialized countries.

About a third of the population is now fully vaccinated. But hospitals in some regions are being stretched, and sick people are being asked to just stay home.

Robert Carnell, regional head of research Asia-Pacific at ING, said the GDP numbers were better than he had expected.

“Normally, we’d put all of this together and forecast a slightly stronger GDP result for the third quarter based on the factors described above. But these are not normal times,” he said, referring to the worries about the COVID-19 infections.

Carnell also noted GDP growth was weaker in Japan than for some other nations, such as the U.S., which has recorded 6.5 percent annualized growth for the same quarter.

The report from the U.S. Commerce Department last month highlighted a sustained recovery from the pandemic recession in the U.S., where the total size of the economy has now surpassed its pre-pandemic level.

Japan has never had a lockdown but has repeatedly declared a government “state of emergency,” for some areas, including Tokyo, centered around having eateries and bars close early or not serve alcohol.

Some places have ignored the emergency requests. Tokyo streets are bustling with crowds of people, and commuter trains are packed.

Public discontent against the government leadership has been simmering after it decided to go ahead with the Tokyo Olympics, meaning thousands of athletes and officials entered the country, and “bubble” conditions at venues, the athletes’ Village and other places were likely compromised.

Japan was not able to rake in the economic benefits from inbound travelers and tourists, as no general-public spectators were allowed in the stands.

Junichi Makino, chief economist for SMBC Nikko Securities in Tokyo, said the rebound will likely pick up momentum later this year as the vaccine rollout picks up and economic activity returns gradually to normal levels.

Japan has had more than 15,000 COVID-19 related deaths so far. Tokyo reported more than 5,000 daily new cases in the past week.