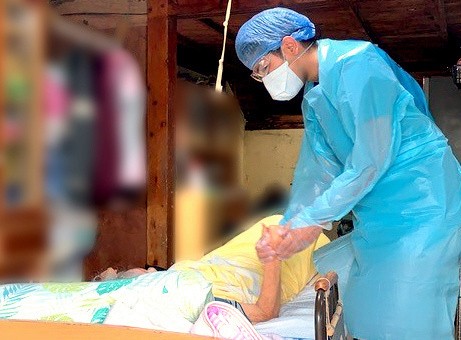 In protective gear, a nurse visits a COVID-19 patient’s home in Uruma, Okinawa Prefecture, to check for signs of change in their condition. The background of the photo is blurred to protect the patient's privacy. (Provided by the home-care service provider Rehabilitation Happiness)

NAHA--Okinawa Prefecture is in dire straits because of the surge in coronavirus outbreaks--even more so than in Tokyo, which has seen unprecedented levels of infections in recent weeks.

In the southernmost prefecture, new cases per 100,000 people in the last week came to 249, surpassing Tokyo’s figure.

“Our health care system is on the verge of collapse,” Governor Denny Tamaki said, expressing a sense of heightened alarm on Aug. 12, when the prefecture logged 732 daily new cases, a record at the time.

In Okinawa Prefecture, the hospital-bed occupancy rate reached 87 percent and all the beds for severely ill patients were full as of Aug. 11, according to data from the central government’s Cabinet Secretariat.

Key factors driving the steep surge in infections include an influx of hordes of tourists from the Tokyo metropolitan area and large cities in the Kansai region, and the highly contagious Delta variant sweeping through the prefecture.

Kazutoshi Nakajima, a professor of infectious diseases at Daito Bunka University in Tokyo, said a prefecture that relies on tourism as a main source of revenue, such as Okinawa, will likely see new variants brought in from outside the prefecture.

“It is possible that Delta was brought to Okinawa as prefectural officials were succeeding in efforts to contain the coronavirus,” said Nakajima, who served as a member of a World Health Organization team on the response to infectious diseases.

Data based on estimates from GPS information on users of NTT Docomo Inc. mobile phones shows that the flow of visitors from outside the prefecture began to decrease after it peaked in early May from the Golden Week holiday period.

In fact, the flow of people plunged by more than 70 percent from its peak the week after May 23, when Okinawa was placed under a state of emergency.

But the number of new cases began going up in late June, after the state of emergency was lifted for Tokyo and Osaka Prefecture.

By the middle of July, new cases rebounded to more than half the numbers logged during Golden Week.

The number of new infections declined again in late July due to typhoons.

The infection trajectory was moving upward again when summer holidays began along with the Bon season, in which throngs of Japanese travelers head to their ancestral hometowns or vacation venues.

Most of the visitors to the prefecture, one of the most popular tourism destinations in Japan, are from Tokyo, Kanagawa, Chiba, Saitama, Osaka, Hyogo, Aichi and Fukuoka prefectures.

The Delta variant is now being detected in many new infection cases after more and more people descended on the prefecture in recent weeks.

The variant did not show up in coronavirus testing until the middle of June.

But then cases of people infected with the highly infectious Delta strain began surging in July.

In the week from July 19 to July 25, the Delta variant accounted for 34 percent of newly confirmed infections.

The variant is quickly spreading in Naha, which is the gateway to Okinawa, central areas and places south of the prefecture where many tourist sites are located.

A local tourism association on Aug. 11 pleaded with tourists to refrain from traveling to the prefecture due to the overwhelmed health care system.

They also urged visitors to take a PCR test at the airport they will depart from if their trips to Okinawa cannot be avoided or postponed.

Nakajima backed the association's plea, pointing to the fact that Okinawa is an island prefecture.

“They cannot transfer patients to hospitals in other prefectures,” he said. “This is not the right time to go to Okinawa if we are to protect its health care system.”