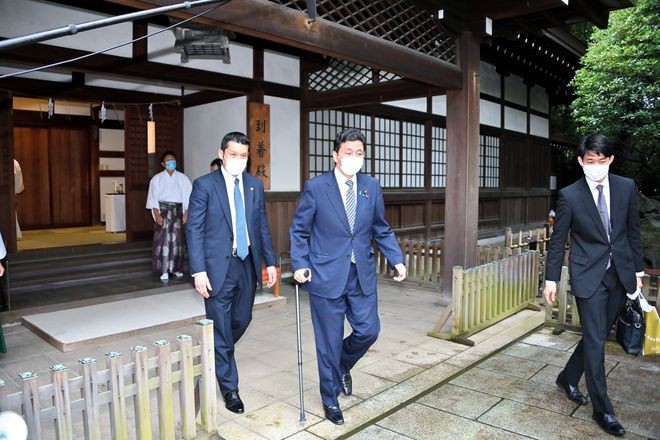 Suga himself did not make a trip to the war-linked Shinto shrine in Tokyo but arranged for a cash offering to be delivered to the shrine, which he paid out of his pocket as the president of the ruling Liberal Democratic Party.

Two days earlier, on Aug. 13, Defense Minister Nobuo Kishi, chief of the executive department of the Self-Defense Forces, and another minister visited the shrine. These Cabinet members’ pilgrimages to the shrine on the 76th anniversary of Japan’s defeat in the war raise serious questions about Suga’s views about history.

Education minister Koichi Hagiuda, Environment Minister Shinjiro Koizumi and Shinji Inoue, minister in charge of science and technology policy, worshipped at the shrine on Aug. 15. Hagiuda and Koizumi visited the shrine for the second straight year.

On Aug. 13, in addition to Kishi, Yasutoshi Nishimura, the economic revitalization minister who also heads the central government's effort against the COVID-19 pandemic, visited the shrine. Kishi was the first incumbent defense minister to visit the shrine since late 2016 when Tomomi Inada, then defense minister, paid a visit.

“It is natural to visit the shrine with the spirit of respect for the souls of people who sacrificed their precious lives in the war for their nation,” Hagiuda said.

But it is one thing that the bereft families of war dead and ordinary citizens mourn the death of people killed in the war at the shrine. It is quite another that Cabinet members and other political leaders visit the shrine, which was the core facility of the wartime state Shinto and served as the spiritual pillar of Japan’s militarism in those days.

They should not complain if their actions are taken as signs that Japan has stopped doing soul-searching over its wartime past and is now trying to justify its prewar history.

At Yasukuni Shrine, the souls of 14 Class-A war criminals are honored along with the general war dead. They are Japan’s wartime leaders who led the nation into the reckless war and were convicted of war crimes at the Tokyo Trial, or the International Military Tribunal for the Far East.

Japan returned to the international community by accepting the rulings handed down at the tribunal as it signed the Treaty of San Francisco in 1951. The ministers’ visits to the shrine could be seen as tantamount to denial of Japan’s postwar history and also raises questions from the viewpoint of the constitutional principle of the separation of religion and politics.

With the number of Japanese with first-hand experiences of the war shriveling, there are concerns that memories of the war are fading away. The situation requires the nation to think afresh what lessons it should learn from history and what it should do to make good use of the lessons for the nation’s future.

In his speech at an annual ceremony to commemorate the nation’s war dead on Aug. 15, Suga largely repeated what his predecessor, Shinzo Abe, said last year and failed to express his own views and thoughts about history.

All prime ministers since Morihiro Hosokawa in 1993 have made some reference to Japan's aggression in Asia by citing “deep remorse” or offering “condolences” to Asian countries during the ceremony. But Abe stopped referring to Japan’s responsibility for its wartime actions when he spoke at the annual event during the nearly eight years he held power for a second time from late 2012.

Suga followed Abe’s example this year. As he promised to carry on the Abe administration’s policy agenda in his campaign to become the LDP’s chief, the position that automatically gives its holder the nation’s top job because of the party’s parliamentary majority, Suga seems to be intent on embracing Abe’s views about history as well.

Abe also visited Yasukuni Shrine on Aug. 15. While he was in office, Abe visited the shrine only once, at the end of 2013. Since he resigned in September last year, however, Abe has repeatedly visited the shrine.

While he served as chief Cabinet secretary under Abe, Suga was once asked by then Okinawa Governor Takeshi Onaga to show more sympathy to Okinawa’s unique history of suffering from the war and its consequences. But Suga said, “As a person born after the war, I find it hard to respond to (such issues concerning) the history (of the war).”

When he delivered a speech at an Aug. 6 peace memorial ceremony in Hiroshima, Suga skipped the most important part of his address referring to Japan’s role as the atomic-bombed country in efforts toward a world free of nuclear weapons.

Suga needs to realize that he cannot fulfill his duties as the prime minister unless he sincerely faces up to the nation’s past.