Tokyo shocked at Taliban victory, failure of years of support 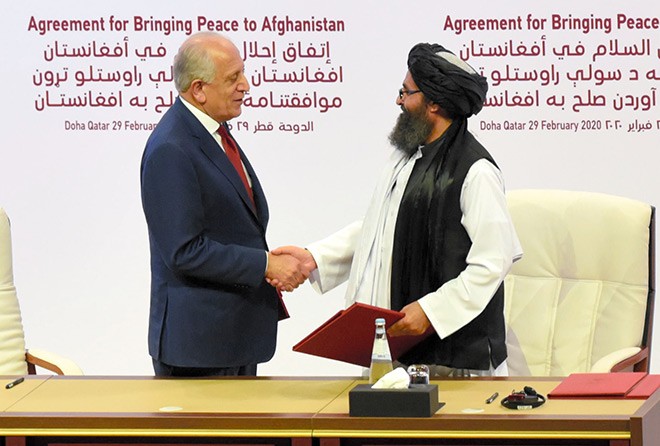 The Taliban’s seizure of power in Afghanistan has dealt a heavy blow to Japan, which has worked hard to help rebuild the country and back up the U.S.-led fight against terrorism.

A senior Foreign Ministry official said the government has yet to decide its response to the Afghan situation, calling it “unprecedented chaos.”

“I would like to urge all concerned parties to restore security and order (in Afghanistan) and ensure that they protect lives and property,” Foreign Minister Toshimitsu Motegi told reporters in Cairo on Aug. 16 after meeting with Egyptian President Abdel Fattah el-Sisi and Foreign Minister Sameh Shoukry.

Motegi, who is on a Middle East tour, also said he shared concerns about the situation in Afghanistan with his Egyptian counterpart and that they agreed to cooperate in preventing it from further deteriorating.

Japan, in cooperation with other members of the international community, has long provided support to Afghanistan to help its reconstruction efforts and the new government’s nation-building since the U.S.-led “war against terror” toppled the Taliban regime in 2001.

In 2002, Tokyo hosted the International Conference on Reconstruction Assistance to Afghanistan, co-chaired by Sadako Ogata, a former U.N. High Commissioner for Refugees who represented Japan at the time, and representatives from the United States, the European Union and Saudi Arabia.

Japan promised to contribute $500 million (54.6 billion yen) in official development assistance, the largest amount among the countries that attended the meeting.

In 2012, Tokyo again hosted the conference jointly with the new Afghan government. The meeting adopted the Tokyo Declaration, which includes financial support totaling more than $16 billion by the participating nations and international organizations.

Japan has provided $6.9 billion in total to support Afghanistan since 2001.

The money has been spent in efforts to restore security, such as training police officers and employing former Taliban militants, and development projects, including agriculture and infrastructure. The financial support also helped Afghanistan strengthen its measures against the novel coronavirus.

Another international conference on Afghanistan’s reconstruction was held online in Geneva last November amid intensified fighting between the Afghan government forces and the Taliban.

At the meeting, Motegi called for a cease-fire, adding that the Japanese government was “ready to consider additional support” to Afghanistan if there was “progress in the peace process.”

But a senior Foreign Ministry official indicated that whether the government will continue providing support will depend mainly on how the United States and other countries respond to the latest situation in Afghanistan.

British Prime Minister Boris Johnson is urging other nations not to recognize a government to be established by the Taliban as a legitimate one. But it is still unclear how other members of the international community will react to the Taliban’s takeover of Afghanistan.

In addition to backing Afghanistan’s reconstruction efforts, Japan also participated in the U.S.-led fight against terrorism.

Between 2001 and 2010, the Maritime Self-Defense Force carried out a refueling mission in the Indian Ocean to help the U.S.-led forces block the inflow of terrorists, arms and drugs into Afghanistan. The deployment of the SDF drew a backlash from Japan’s opposition parties, sparking a heated Diet debate.

(This article was written by Naotaka Fujita, a senior staff writer, and Amane Sugawara in Tokyo and Manabu Kitagawa in Cairo.)