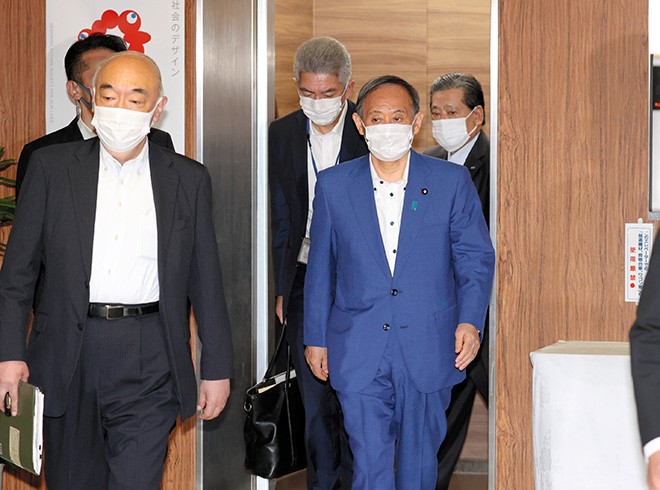 Prime Minister Yoshihide Suga attends a meeting of executives of his Liberal Democratic Party at the party headquarters on Aug. 3. (Koichi Ueda)

The ruling Liberal Democratic Party is considering holding the election to decide its president on Sept. 29 with campaigning to begin on Sept. 17, sources said.

The election could be postponed to a later date, however, if Prime Minister Yoshihide Suga dissolves the Lower House for a snap election before his term as LDP president expires at the end of September.

The party’s General Council will decide on the date of the LDP presidential election after the party election management committee convenes on the issue on Aug. 26. The current term of Lower House members ends on Oct. 21.

Some of the party’s Diet members are urging that Suga’s term as president be extended as the government has had its hands full containing the pandemic.

But calls are growing from junior and mid-level LDP legislators for holding the presidential poll as scheduled for September, ahead of the Lower House election.

Those who favor sticking to that schedule want to refresh the party’s image by holding the presidential vote as approval ratings for the Suga Cabinet have plunged to a record low since it was formed last September.

Hakubun Shimomura, the LDP’s policy chief, expressed support for the idea when he appeared on a satellite TV news show on Aug. 11.

LDP presidents serve for a three-year term. Suga replaced Shinzo Abe as party president after Abe quit with one year left in his term.

The election management committee has already set at an Aug. 3 meeting that it will hold the full-fledged presidential poll this time by allowing rank-and-file LDP members and support groups from across the country to vote, ahead of a vote by party Diet members.

Party executives leaned toward holding the poll on Sept. 29 as Suga indicated that he wants to dissolve the Lower House before the presidential election. They also took into account the progress in the vaccine rollout and other measures to fight the novel coronavirus.