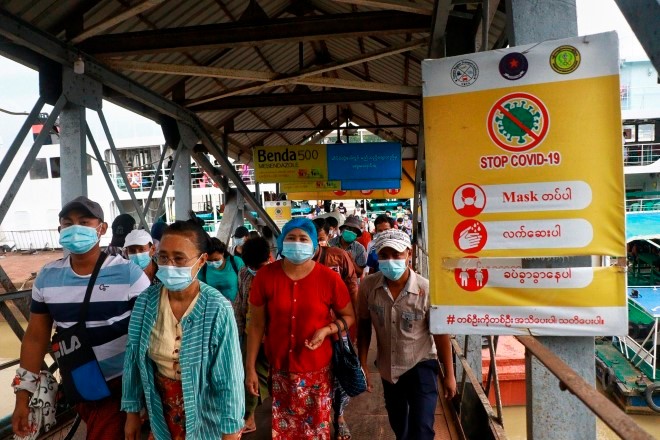 In this July 27 file photo, ferry passengers wearing face masks to help curb the spread of the coronavirus walk past a ‘Stop COVID-19’ poster at the Pansodan jetty in Yangon. (AP Photo)

UNITED NATIONS--The United Kingdom called Tuesday for an immediate and sustained pause in clashes and unrest in Myanmar to allow vaccinations as an intense COVID-19 surge is ravaging the country.

Britain’s deputy U.N. ambassador, James Kariuki, told reporters after closed Security Council discussions that the call for a humanitarian pause and a strong international response was joined by Foreign Minister Dato Erywan of Brunei, the new special envoy for Myanmar from the 10-member Association of Southeast Asian Nations who joined the meeting virtually.

“Prior to the coup, Myanmar had a strong vaccination record and was developing a COVID-19 plan,” he said. “Now, Myanmar’s health system is barely functioning, unacceptable attacks on hospitals, doctors and nurses continue, and only 3 percent of the population are vaccinated.”

Myanmar has been struggling with one of the worst COVID-19 surges in Southeast Asia, and the military leadership that ousted Nobel Peace Prize laureate Aung San Suu Kyi’s democratically elected government Feb. 1 has been accused of diverting critical medical supplies to itself and its supporters.

Schraner Burgener called on U.N. member states Tuesday to support pandemic and other humanitarian efforts in Myanmar and she also called on the parties to allow a vaccination campaign “to go forward through all available avenues in the country,” Dujarric said.

Kariuki said that “the UK is calling for an immediate and sustained humanitarian pause to allow vaccines to get to all in need, and for medical and humanitarian staff to work without fear or attack.”

He said that at the council meeting “we had a lot of calls for a humanitarian pause,” but members did not take any action.

Kariuki said U.N. officials will work with Security Council members, other U.N. members and international partners such as the Global Alliance for Vaccines and Immunization “to ensure the people of Myanmar get access to vaccines in an equitable way--regardless of politics, ethnicity or religion.”

“Vaccines must be tools of protection, not politics,” he said, stressing that the political situation is having an impact on the humanitarian crisis.

Myanmar for five decades languished under strict military rule that led to international isolation and sanctions. As the generals loosened their grip, culminating in Suu Kyi’s rise to leadership in 2015 elections, the international community responded by lifting most sanctions and pouring investment into the country. The Feb. 1 takeover followed an overwhelming victory by Suu Kyi’s National League for Democracy party in November elections that the military contested as fraudulent.

The military takeover was met with widespread protests that have resulted in a lethal crackdown by security forces, which routinely fire live ammunition into crowds. Armed resistance to the military is growing in both urban and rural areas.

Myanmar’s Assistance Association for Political Prisoners reported Tuesday that 999 people have been killed since Feb. 1. It said 7,320 have been arrested, of whom 5,712 are still detained, including Suu Kyi and ousted President Win Myint.