Insiders: Suga’s strategy to stay in power on brink of collapse 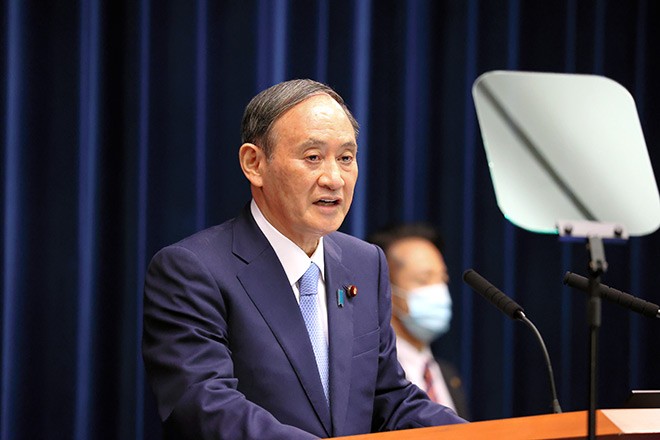 Prime Minister Yoshihide Suga on Aug. 17 says the COVID-19 state of emergency would be extended until Sept. 12. (Koichi Ueda)

Prime Minister Yoshihide Suga’s decision on extending the deadline of the COVID-19 state of emergency was a power-retaining political maneuver that appears destined to fail, inside sources said.

By lengthening the emergency declaration for Tokyo and 12 other prefectures until Sept. 12, Suga will have more options for dissolving the Lower House and calling a snap election.

But that date also gives Suga a deadline to bring the worsening novel coronavirus situation under control. And with no significant new measures to halt the surge in infections, Suga’s political strategy is already increasingly tethering on the brink of collapse.

A high-ranking government bureaucrat said “there is no clear significance” to extending the deadline to Sept. 12.

Another bureaucrat said, “It was a political decision related to the political calendar.”

According to several government sources, pushing the deadline to the end of September was considered, but in the end Suga settled on Sept. 12.

Many lawmakers close to the prime minister felt it would be difficult to dissolve the Lower House while a state of emergency was in place.

Extending the deadline through September would have effectively tied Suga’s hands for a dissolution before his term as president of the ruling Liberal Democratic Party expires at the end of that month.

However, Suga may have to again extend the state of emergency if he cannot improve the COVID-19 situation by Sept. 12.

“It will be impossible to dissolve the Lower House in September,” a member of the Suga Cabinet said. “The prime minister’ strategy has collapsed.”

Suga’s initial plan to use the Tokyo Olympics to heighten public momentum for his administration fell flat. Almost all of the events were held without spectators in the stands, and the number of new COVID-19 cases soared while the competitions were being held.

Although public support for the Games has risen, the approval rating for the Suga Cabinet has dropped.

Those close to Suga are now turning their attention to using COVID-19 vaccinations as the catalyst to turn around public opinion.

On Aug. 13, Suga told reporters that the government had put a system in place that would allow for 80 percent of the public to be fully vaccinated by early October.

If that goal is reached, some within the ruling coalition would likely call for dissolving the Lower House on Oct. 21, when the terms of current members will end, and holding the election on Nov. 28.

But under that scenario, Suga’s term as LDP president would end before the Lower House election. Calls could increasingly arise from within the LDP to replace the unpopular Suga as party president to give the LDP a better chance in the election.

In that case, Suga and his close associates would have to somehow move to prevent an internal party uprising from occurring.

(This article was written by Keishi Nishimura, Takashi Narazaki and Kohei Morioka.)