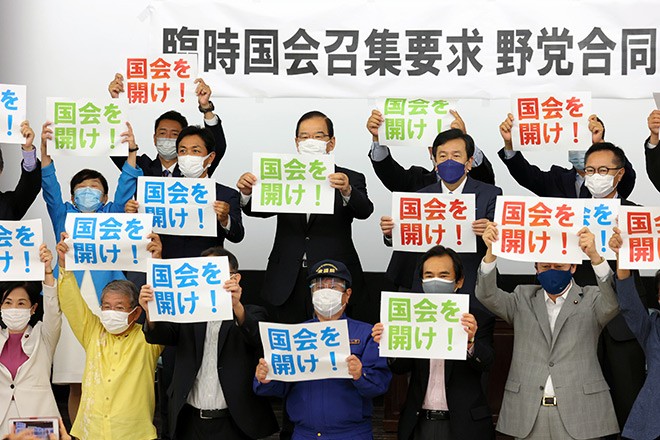 Blasting the government's slow response to the coronavirus pandemic, the opposition bloc has repeated its demand for an extraordinary Diet session to compile a supplementary budget to tackle the deepening health crisis.

“It is obvious that politics is not functioning properly despite the country being faced with one of the most serious crises in postwar years,” Yukio Edano, leader of the main opposition Constitutional Democratic Party of Japan, said on Aug. 17. “We must compile a supplementary budget expediently and execute it.”

The demand came the same day as the government decided to place seven more prefectures under a state of emergency from Aug. 20 to total 13, including Tokyo and Osaka Prefecture.

The government also decided to extend the emergency period for the capital and five other prefectures to Sept. 12 from Aug. 31, in line with the seven prefectures.

The heads of the Japanese Communist Party, the Democratic Party for the People and Social Democratic Party joined Edano in denouncing the Suga administration’s response to the pandemic as slow.

The ruling coalition of the Liberal Democratic Party and its junior partner, Komeito, had rejected opposition parties’ demand for extending the regular Diet session beyond June 16 to grapple with the virus response.

After the Diet session ended, members of Diet committees have met to deliberate pressing issues under a system available while the parliamentary body is in recess.

However, their powers in such a setting is limited as they cannot write a law or compile a budget unless the Diet is in session.

The opposition parties also made a demand for an extraordinary session on July 16, only to be turned down by the ruling coalition.

Kazuo Shii, chairman of the JCP, called for cash payments to citizens and the distribution of funds to medical centers that have been struggling with a plunge in revenues due to a sharp drop in patients.

Mizuho Fukushima, head of the SDP, pressed the government to build makeshift hospitals to treat the growing swell of COVID-19 patients.

Yuichiro Tamaki, leader of the DPP, stressed the urgency of enacting a law that can order citizens not to go out alongside offering financial compensation.