Nurses fight to save COVID-19 patients battling virus at home 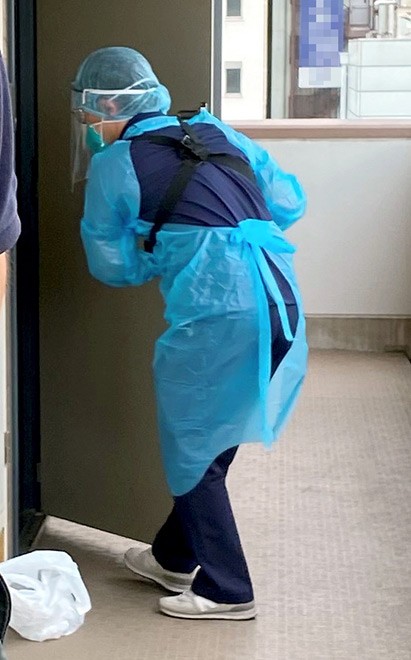 A nurse clad in protective gear against the novel coronavirus, enters a COVID-19 patient's home to check on their condition in Kanagawa Prefecture on Aug. 8. Part of the photo has been modified. (Provided by Sophiamedi)

FUJISAWA, Kanagawa Prefecture--As the number of COVID-19 patients battling the disease at home surges, nurses being dispatched to care for them are reporting cases that suddenly turn severe and illnesses lasting longer than in previous waves.

At 9 a.m. on Aug. 16, a team of nurses and other workers began an online meeting at a conference room in a building here to share information on their patients fighting COVID-19 at home.

“The family of a man we red-flagged yesterday called 911 that night,” one of the members said of the patient in his 50s.

The red flag is a reference to patients with a blood oxygen saturation level reading of 93 percent or under.

A reading of 96 percent or above is considered normal.

They are monitoring the health of COVID-19 patients who are on a waiting list for hospitalization or those requiring a close watch, including a reading of 95 percent or under for blood oxygen saturation levels. They are working in Fujisawa and elsewhere in the prefecture, under a contract with the Fujisawa city government and two other municipalities.

As of Aug. 11, 74,135 patients with COVID-19 are recuperating at home across the nation, according to the health ministry, jumping to 13 times the number four weeks earlier.

The patients were fighting the disease at home due to public health centers assessing their symptoms as mild or not serious enough to require hospitalization as health care systems around the country are at near full capacity for accepting patients.

Most of the patients battling the virus at home, more than 60 percent, are in the Tokyo metropolitan area, including Kanagawa Prefecture.

An alarming fact about patients with COVID-19 is that mild or moderate symptoms can worsen abruptly and become fatal.

In Tokyo, the deaths of seven patients have been reported so far in August alone, including a man in his 30s with no underlying health conditions.

On Aug. 16, the Sophiamedi team called patients in Fujisawa to ask them a list of questions on how they were faring, such as if they had difficulty breathing or if their fingertips had turned purplish. They jotted down the replies and any points that were cause for concern.

If patients mention complaints about their health, the team recommends a visit by a nurse or an online interview by a doctor to assess if they need hospitalization.

“A month ago, patients could be admitted to hospitals without much trouble, but not anymore,” Ikumi Kondo, a nurse, said. “I hear a growing sense of urgency in their voices.”

To assess which patients need to be hospitalized, the Kanagawa prefectural government has introduced a scoring system. Six points, for example, are given to a patient whose blood oxygen saturation level is 93 percent or under.

Patients with a total score of five points or above are supposed to be admitted to hospitals, according to the prefecture’s guidance.

But today not all of them are. Some have been denied hospitalization as medical centers have been increasingly stretched over the past weeks with an explosive growth in new cases amid the current wave of infections.

Patients recuperating at home are cleared three days after their symptoms have eased and 10 days after they began displaying symptoms.

“In the third wave of infections during the year-end, many patients recovered after their fevers subsided in a couple of days,” she said. “But today, patients are fighting prolonged bouts.”

At 2:30 p.m. on Aug. 16, nurse Kazuhiro Shine drove to a patient’s home in the city to determine whether he should be hospitalized.

Shine put on protective clothing against the novel coronavirus in front of the entrance of his home.

Aug. 16 marked the patient’s seventh day of recuperating at home. The patient, in his 40s, could not stand and sat on the floor near the entrance when Shine met him.

It appeared that he had slight difficulty in breathing, but it had not become serious.

With relatives at home watching his health, Shine assessed that the patient could continue his recuperation at home. But he conceded that his judgment could have been different if the health care system were not overwhelmed.

“It is possible that I may have recommended hospitalization if I had seen him a month earlier,” Shine said.

A patient another nurse visited was hospitalized the same day after consultation with a doctor.

That day was her 12th spent recuperating at home. The patient, in her 50s, developed a serious condition, with a blood oxygen saturation level hovering between 80 and 90 percent and a fever that ran from above 38 degrees to above 39 degrees for more than a week.

Shine, on his way back to the support center, said he had been doing his best to keep his patients alive.

But he said fighting the latest wave of infections is proving to be an enormous challenge, compared with previous waves.

“We have no clues about when the current infections will peak out,” he said. “It's excruciating to have to run a marathon with no goal in sight.”