Documents about Sri Lankan who died in detention heavily censored 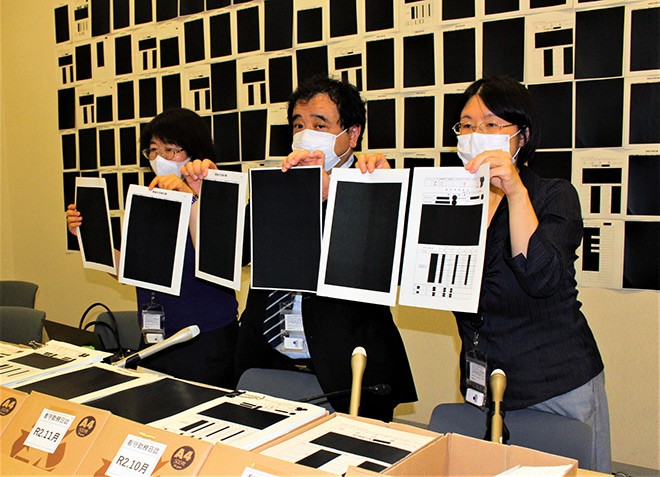 Released documents related to Wishma Sandamali, who died while in detention, are shown at a news conference in Tokyo on Aug. 17. (Ryuichi Kitano)

The operator of an immigration facility in Nagoya has disclosed a trove of redacted documents related to a Sri Lankan woman who died while detained there.

But her family said the pages are so heavily blacked out that all the key information remains undisclosed.

The family of Wishma Sandamali, 33, who died in March at a detention facility run by the Nagoya Regional Immigration Services Bureau, criticized the bureau at a news conference on Aug. 17 for its lack of transparency about the circumstances surrounding her death.

“The bureau put all the information concerning her into a black box and wouldn’t disclose any of it,” the family’s lawyer said. “It shows no sign of remorse.”

The bureau released 15,113 sheets of administrative documents regarding Wishma, including detention officers’ work logs, her medical reports and records of her meetings with visitors, according to the family's lawyer.

The lawyer said he had asked the bureau on April 9 to give the family the papers, but the request was initially rejected. After the lawyer demanded the documents be disclosed on May 12, the bureau sent out three cardboard boxes on Aug. 2 containing mostly blacked-out documents.

In a notice dated July 15, the bureau said disclosing the redacted parts could infringe on the privacy rights of individuals, disrupt its ability to maintain its security and compromise its neutrality as an administrative body.

“With so many parts of the documents blacked out, I can’t trust the contents of the (final) report (on her death), either,” Wishma’s sister Poornima, 27, said at the news conference. “I think the bureau wants to hide the fact that my sister was killed.”

On Aug. 17, a separate news conference was held by four human rights groups, including an advocacy group called the Japan Network towards Human Rights Legislation for Non-Japanese Nationals and Ethnic Minorities, and Human Rights Now, a Tokyo-based international nongovernmental organization.

They issued a joint statement criticizing the final report on Wishma’s death released by the Immigration Services Agency on Aug. 10. The statement said the report was “totally insufficient” when it came to determining the cause of her death and producing measures to prevent a similar incident from occurring again.

The groups said the report reveals many disturbing acts by immigration officials that trampled on her human dignity.

The groups concluded that Wishma died as a result of an “arbitrary detention” that violated Japan’s Constitution and international human rights law.