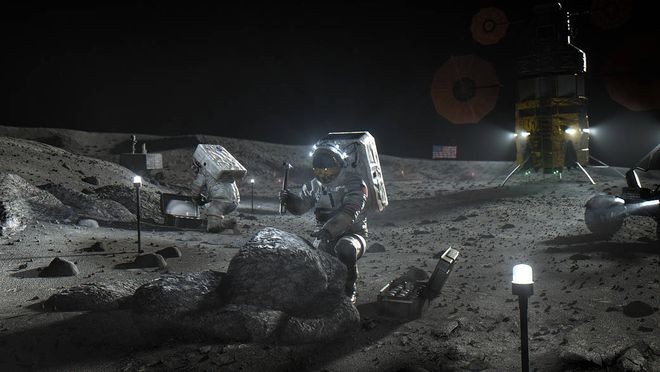 When Japanese astronauts in the future collect water, minerals and other materials on the moon, they won't have to worry about legal trouble or claims when they return to Earth.

The Diet passed the outer space resources law in June to allow domestic private businesses involved in those space exploration projects to collect resources on surveyed celestial bodies for their own use. That made Japan the fourth nation with such legislation after the United States and elsewhere.

The law seeks to encourage private entities to engage and invest more actively by granting them the legal rights to space resources.

“The legislation has been put into effect earlier than other nations across the globe,” said Takahiro Nakamura, director and COO of Japanese space development start-up ispace Inc.

“More detailed guidelines are still needed in some respects, but the legislation will give momentum to expand the space industry market and motivate many private corporations to take part,” Nakamura said.

Ice and water on the moon are expected to be utilized for quenching astronauts’ thirst. While iron, titanium and aluminum there may prove helpful to maintain space probes and rockets, helium-3 is said to exist for possible use as fuel for nuclear fusion.

Plans to collect materials and energy sources on the moon are being considered for a transit point to be secured to explore Mars and other distant planets, raising concerns over whether only limited states should tap into resources on other heavenly bodies.

The Outer Space Treaty, which came into effect in 1967, bans certain nations’ exclusive possession of the moon and other celestial bodies but does not clearly prohibit states from taking ownership of space resources.

In 1984, the Moon Agreement went into force, describing the moon’s natural resources as “the common heritage of mankind.” However, Japan, the United States, China, Russia and other leading space developing countries have not ratified it.

As there were no effective international rules on the issue, the United States in 2015 put a law into effect to enable private companies to legitimately take control of space resources amid the increased moon and Mars exploration boom.

Inspired by the move, Luxembourg, which is forging ahead with space development as part of its national industrial strategy, and the United Arab Emirates have similar legislation in place.

The United States also released the Artemis Accords last year to render it legal for astronauts to extract and utilize resources, with 12 nations, including Japan, signing the agreement.

Such countries as Russia, however, criticized the framework for imposing rules and regulations in a one-sided manner whereas space is the common heritage of mankind, and called for the issue to be discussed in the United Nations.

Although the U.N. Committee on the Peaceful Uses of Outer Space has started examining the topic, it appears unrealistic that it will reach an agreement, for which unanimous support by all its members is necessary, given the great differences in their space development capabilities.

With the situation in mind, Tokyo enacted the outer space resources law in June this year as suprapartisan lawmaker-initiated legislation. Under it, companies wanting to search and develop space can take ownership of resources if the government approves their notified objectives, timing and methods of research.

The Japanese Communist Party opposed the law in the bill screening process, insisting that it could “lead to a space development competition where those who arrive first can get all the resources.”

But Keitaro Ohno, a Lower House member from the ruling Liberal Democratic Party who took the initiative, emphasizes the significance of the law.

“The widely accepted interpretation from an international law standpoint is that resources’ ownership can be defined by each nation’s domestic legislation,” said Ohno. “States with high capabilities need to take a leadership role to set rules to prevent unregulated space development.”

He continued, “The space resources law’s enactment has provided the foundation for Japan to join discussions about the issue.”

Increasingly larger investments are being made in space development. While Sony Corp. and Tomy Co. are developing lunar rovers, Honda Motor Co. and Toyota Motor Corp. are working on systems to generate water and oxygen as well as space exploration vehicles.

In July, 30 businesses and other organizations along with researchers unveiled their vision for the lunar industry, looking to exhibit water and ice from the moon at the 2025 Osaka Kansai Expo and produce new privately led businesses.

(This article was written by Keisuke Katori and Shiori Ogawa.)