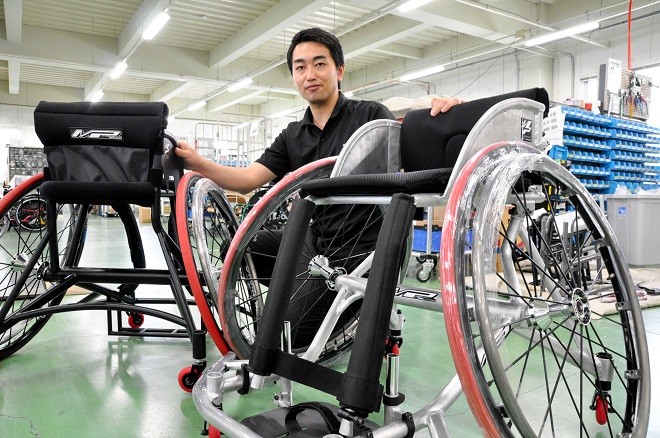 When a competition started in 2018 for selecting the supplier of wheelchairs to be used by the British national wheelchair basketball team, a small manufacturer based in Yoro, Gifu Prefecture, decided to take a shot.

A long-established British maker, which had been the supplier up to that time, and a big-name U.S. manufacturer sought the contract. Underdog Matsunaga Manufactory Co., which had seen its products used by British athletes, entered the bidding anyway.

When the powerhouse British team take the court at the Tokyo Paralympics, most of the players will be competing in Matsunaga supplied wheelchairs.

“Even we, ourselves, had not expected that we would win the bid,” said Noriyuki Matsunaga, 50, the president of the company.

At the Paralympics, the technological expertise of Japan’s manufacturing industry will help the athletes perform at their best.

They can put forth their best performances only after paying close attention to the tools that they need to use in competition.

Yamamoto Kogaku Co., known for its “Swans” brand of sunglasses and goggles, has long been a “guardian” of the eyes of top athletes.

The company based in Higashi-Osaka, Osaka Prefecture, provided a unique-shaped pair of sunglasses to Jun Mizutani, who wore them when he played table tennis during the recent Tokyo Olympics.

The sunshades helped Mizutani, who has problems with seeing the bouncing ball, win the gold medal in the mixed doubles.

Yamamoto Kogaku, has been focusing, with regard to the Paralympics, on the manufacturing of “blackened goggles” for visually impaired swimmers.

To ensure fairness, blind and nearly blind swimmers in the S11 class, with the severest visual impairment, are required to wear goggles that completely block all light.

While more than a few swimmers in that class used to compete in goggles painted black with oil-based marker pens, Yamamoto Kogaku developed its blackened goggles at the request of athletes who said they wanted to wear the same goggles as those for general use. The products were put on sale in 2012.

The company’s officials do not believe that Paralympians need special products just because they are Paralympians. Apart from the blackened goggles, the company has also made mirrored goggles, which have been used by Olympians.

Yamamoto Kogaku has attached importance not just to product quality and safety but also to excellence in design. It was also named an official supplier for World Para Swimming in 2019.

The company has received orders from customers overseas, including in Australia, a major swimming power, and Europe. The sales volume of blackened goggles, however, has hovered around only 100 units or so a year.

“What matters to us is this very opportunity we have for working with athletes to develop our products, because we have consistently practiced a hands-on approach,” said Naoyuki Yamamoto, president of the company. “The Paralympics may have less (media) exposure (than the Olympics), but they give us so much to learn from on the development front.”

The developer integrated the lenses with the frame to increase the eyeshades’ strength and thickened the frame to mitigate the impact on the eyes and the nose.

Japan’s national women’s goalball team will be using eyeshades of a rival manufacturer during the Tokyo Paralympics, but Yamamoto Kogaku’s pink-based, colorful shades were well-received by the team’s members, company officials said.

The officials added they are hoping that Japan’s national team will be competing in Yamamoto Kogaku’s eyeshades during the 2024 Paris Games.

The achievement is gold medal worthy, how Matsunaga Manufactory, a company that was founded in 1974 and has a head office in a town of only 28,000 or so residents, has ended up working with the world-renowned British wheelchair powerhouse team.

The competition to be named the supplier lasted for a week.

As athletes test-drove wheelchairs of the three contestants, officials took sprint times along a straight course and checked out the handling of the products, including the ease of making a turn. They also interviewed the athletes to learn what they thought of the comfort of the wheelchairs and their ease of handling.

Matsunaga holds the top share in Japan for wheelchairs and other welfare equipment.

The company has put much effort since the 2000s into the manufacturing of sport wheelchairs and has received requests from members of Japan’s national wheelchair basketball team.

During the competition, Matsunaga’s product received high marks for its “semiadjustable” structure, which allows the angles of the seat and the footrest and the position of the axle to be fine-tuned.

The aluminum frame of the product is divided into separate parts that are assembled together with bolts. That allows the frame to bend and therefore allows the wheelchair to make a pliant turn, for which the product has earned a sterling reputation.

Wheelchairs must be custom-made to meet the characteristics of the individual athletes.

“Top athletes do perceive minute changes in conditions,” said Takekazu Okagawa, 27, a mechanic in charge of the British national team. “Our products can be adjusted from day to day in small units of 5 to 10 millimeters, so it is not difficult to have them set at optimal positions.”

Matsunaga signed an official agreement with British Wheelchair Basketball to provide equipment and send a mechanic to the national team for four years starting in August 2018.

Britain’s national team emerged victorious in the men’s section and took second place in the women’s during the Wheelchair Basketball World Championship of 2018, the first occasion for the team to compete with Matsunaga’s products.

During the Tokyo Paralympics, eight of Britain’s 12 male and 10 of its female athletes will be competing in Matsunaga’s wheelchairs aiming for victory, officials said.

“I hope the spectacular showings of Paralympians will send out the message that nobody has to give up on various things as long as opportunities are available for using appropriate tools that meet the characteristics of the individuals,” said Matsunaga, the company president.

(This article was compiled from reports by Issei Sakakibara and Ayako Fujita.)