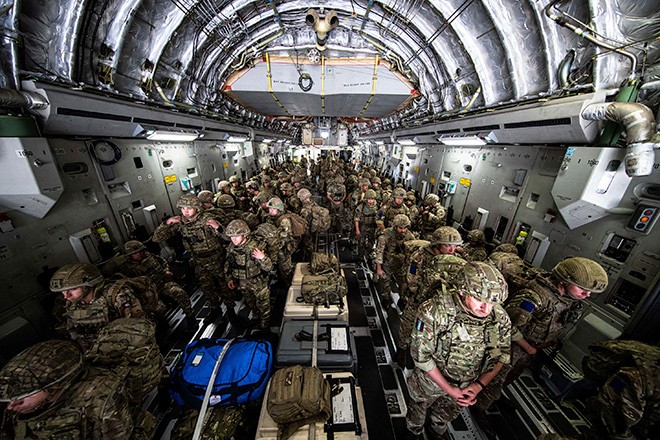 British Forces arrive in Kabul to assist in evacuating British nationals and eligible persons from Afghanistan. (Britain’s Ministry of Defense via AP)

Afghans who worked for Japan in Afghanistan and their families remain stranded in the country, despite fears for their safety following the Taliban's takeover as Japan has yet to decide how to get them out, multiple sources said.

“My Japanese colleagues told me that they wanted to help us evacuate along with them, but they said they couldn’t,” an Afghan staff member of the Japanese Embassy in Kabul told The Asahi Shimbun over the phone on the evening of Aug. 15.

“They said they will come up with ways to transport us out of the country,” the man said.

The government last week began discussing a plan to evacuate Afghans working for its embassy in Kabul and those at a local office of the Japan International Cooperation Agency (JICA) out of Afghanistan, a senior Foreign Ministry official said.

But the plan is in limbo because the government has been unable to arrange flights or secure other means to transport Afghan staff along with their families, the official said.

About 500 Afghans--staff members of the Japanese Embassy and the JICA office in Kabul and their family members--have said they want to be evacuated out of the country, a Japanese government official said. So far, all staff who remain stranded in the country have been confirmed safe, according to the official.

All 12 Japanese staff members of the embassy evacuated to Dubai on Aug. 17.

They were transported by a British military aircraft after London granted a request from Tokyo to share it, according to sources. The Japanese government thinks it would be difficult to evacuate the local personnel of its institutions all at once since it has not sent aircraft to Afghanistan on its own, the sources said.

“We want to find a way out,” an official close to Prime Minister Yoshihide Suga said. “We will think about what measures we can take by cooperating with other countries.”

(This article was written by Masatomo Norikyo in Bangkok and Ryutaro Abe in Tokyo.)