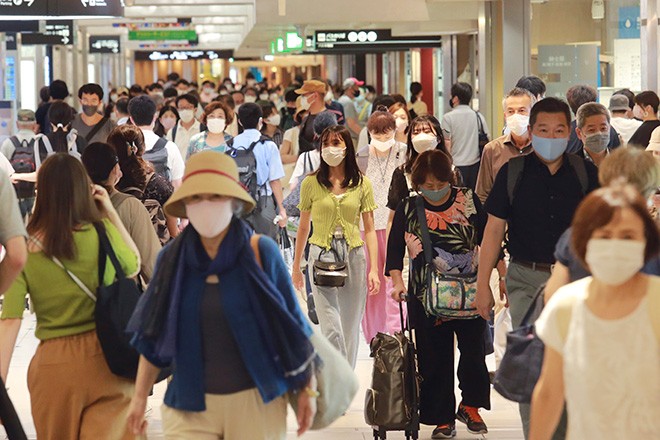 People wearing face masks to protect against the spread of the novel coronavirus walk in an underground shopping center in Yokohama, near Tokyo, on Aug. 18. (AP Photo)

Tokyo reported a record high 5,534 fresh cases for a Thursday, its second highest for a single day after the 5,773 tallied on Aug. 13.

The Kawaguchi city government in the prefecture reported that a man in his 50s recuperating at home had died on Aug. 15.

Fukuoka Prefecture on the main southern island of Kyushu reported 1,134 new cases, the second straight day the tally has exceeded 1,000, while Hyogo Prefecture also topped 1,000 for the second consecutive day with 1,078.

For the week ending Aug. 19, the daily average of new cases in Tokyo was 4,774.4, which represented a 20.1 percent increase over the previous week.

There were four fatalities in the capital from COVID-19, all patients in their 70s and 80s. There were also 274 COVID-19 patients with symptoms serious enough to require the use of a ventilator or other equipment to breathe, down one from the previous day.