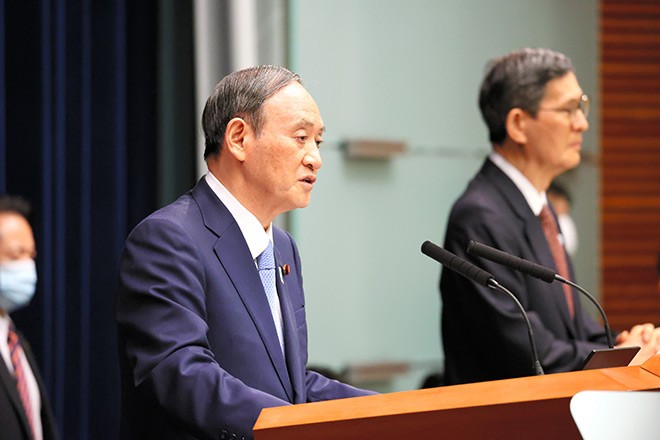 The government is considering changing its guidelines for declaring and lifting a COVID-19 state of emergency by placing more emphasis on the medical care structure instead of infection numbers, sources said.

The possible shift would be aimed at ensuring health care systems do not become overstrained, a problem facing many local governments in the latest surge of the novel coronavirus, they said.

When Prime Minister Yoshihide Suga announced an expansion of the state of emergency at his Aug. 17 news conference, he explained that the emergency declaration would be lifted based on the state of the medical care structure.

That indicates future attention would be focused on the number of patients with serious symptoms and the ratio of hospital-bed usage by such patients.

Shigeru Omi, chairman of the government panel of experts who accompanied Suga at the news conference, said a fundamental point in coming up with an exit strategy would be focusing on the medical care structure, including the number of patients with serious symptoms and the number who are hospitalized.

The government currently uses five guidelines in deciding on declaring and lifting the state of emergency.

The number of new COVID-19 cases has been considered the leading indicator. An increase in that figure was believed to lead to a rise in the number of those with serious symptoms, putting greater pressure on the medical care structure.

Currently, the number of new COVID-19 cases over a week per 100,000 residents has been the main guideline used to declare a state of emergency.

A prefecture with 25 or more cases per 100,000 people is considered at the most serious stage 4, where an “explosive growth” in infections is occurring.

“If we keep the guidelines unchanged, there will be no way to lift the state of emergency in the near future,” a Cabinet minister said.

Some officials also said new guidelines are needed because the increasing number of people who are vaccinated would decrease the risk of patients developing serious symptoms.

However, other government officials voiced skepticism about the possible change, noting that unlike influenza, there are few drugs that can be used to treat COVID-19 patients.

A bureaucrat dealing with the pandemic also said criticism would arise from the public if the guidelines were reviewed to make it easier to lift the state of emergency.

At his Aug. 17 news conference, Yasutoshi Nishimura, the state minister in charge of economic revitalization who also heads the central government’s efforts against the pandemic, said he would ask experts to consider whether different guidelines or other reference points were needed to make decisions about a state of emergency.

He said that as more people are vaccinated, having more than 25 infected people per 100,000 residents over a week may no longer be considered a major problem.

Nishimura also indicated that other factors would have to be taken into consideration when reviewing the guidelines, including rate of vaccinations among those in their 40s and 50s, who are now most vulnerable to developing serious symptoms, as well as the hospitalization rate and the number of those with serious symptoms.