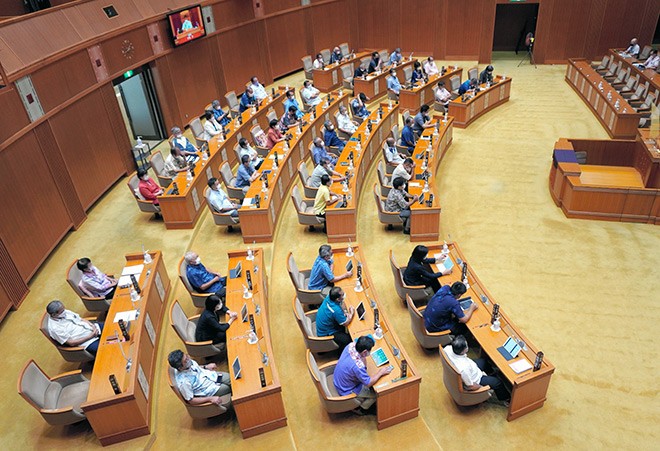 NAHA--The U.S. military's refusal to accept a protest by Okinawa prefectural officials over an alleged sexual assault of a Japanese woman by a civilian employed by a U.S. government agency is further straining ties in Japan's southernmost prefecture.

The dispute stems from an incident in July involving a 25-year-old civilian worker who was arrested on suspicion of attempted forcible sexual intercourse. Police suspect he attempted to sexually assault a Japanese woman in the central part of Okinawa's main island in April.

On Aug. 19, the Okinawa prefectural assembly unanimously passed a protest resolution and a written opinion asking both the Japanese and U.S. governments to work to prevent a recurrence of an act “that trampled on human dignity.”

According to Okinawa prefectural officials, after the man was arrested, an attempt was made to contact the U.S. military to lodge a protest and ask that efforts be made to prevent a recurrence.

But the U.S. military said it could not accept the protest because the arrested individual was not under its direct management. It suggested to the Okinawa prefectural government that it try to submit the protest to the organization that hired the individual, which is affiliated with the Pentagon.

The man was employed by the Army and Air Force Exchange Service (AAFES), which retails food and other supplies to U.S. military personnel and their families. According to the organization’s website, it is governed by a board of directors that is responsible to the secretaries of the U.S. Army and Air Force.

Under the Japan-U.S. Status of Forces Agreement (SOFA), the United States is granted the “primary right” to jurisdiction over U.S. service members and American civilian workers at U.S. bases who have been involved in crimes or accidents while on duty.

But the definition of civilian worker had been ambiguous and a clarification was made in the wake of a 2016 incident in Uruma, Okinawa Prefecture, in which a local woman was murdered by a civilian worker.

Under the new definition agreed to by the two governments, eight categories of civilian worker were clarified including those hired by companies that have been contracted by the U.S. military as well as those hired by organizations that provide benefit services to U.S. military personnel.

The protest resolution passed by the Okinawa prefectural assembly was due largely because the U.S. military refused to accept the original protest. The assembly intends to submit the resolution to the AAFES.

A high-ranking prefectural government official said it felt improper that a civilian worker protected by SOFA was not under the jurisdiction of any segment of the U.S. military.

But another official raised doubts as to whether the protest would have any effect, given that the repeated requests made to the U.S. military to prevent a recurrence of various incidents have produced almost no effect.