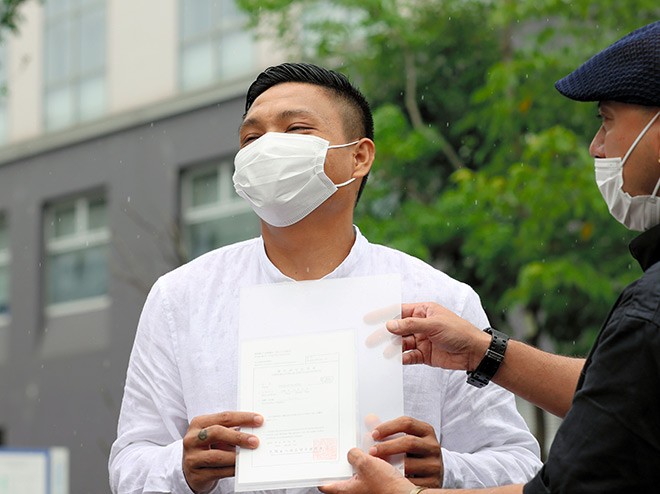 OSAKA--A soccer player from Myanmar who refused to return to his homeland in protest against the military coup there was granted refugee status in Japan on Aug. 20.

“I’m truly grateful to the people of Japan, the Japanese government and all those who have supported me. I’m relieved,” Pyae Lyan Aung said after receiving a certificate of refugee status from the Osaka Regional Immigration Services Bureau that day.

The goalie, who came to Japan with the Myanmar national team for a May 28 World Cup qualifying round match against Japan, made a three-finger salute, a gesture of resistance against the military coup and oppression in his home country, during the national anthem.

He subsequently refused to board the aircraft returning to Myanmar and applied for refugee status on June 22, citing fears that he would face persecution if he returned home.

On July 2, he was granted a “designated activities” visa that would allow him to stay in Japan and work for six months.

The Immigration Services Agency had already instituted a policy for Myanmar nationals who did not want to return home due to the unrest there. Such individuals are granted six- or 12-month stays with a visa similar to the one given to Pyae Lyan Aung.

He submitted an application to change the visa status to become a long-term resident and the request was granted on Aug. 20, allowing him to stay in the country for five years.

Pyae Lyan Aung is now a trainee of YSCC Yokohama, which is in the J.League's third division.