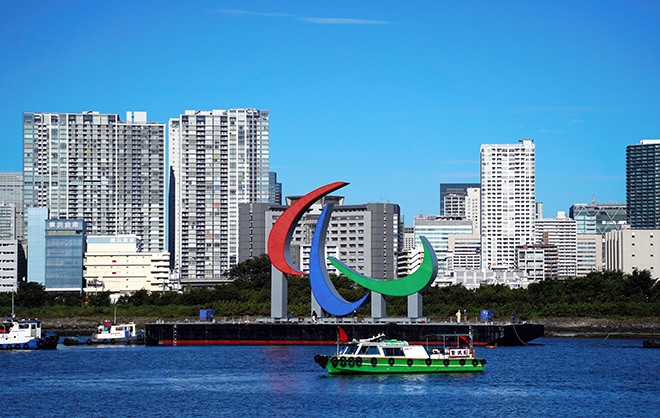 The Paralympic logo is put on display off Odaiba Marine Park in Tokyo’s Minato Ward on Aug. 20. (Hiroki Endo)

The capital's latest figure was down 368 from a week ago and brought the daily average of new infection cases in the metropolis over the week through Aug. 20 to 4,721.9, an increase of 13.6 percent from the preceding week.

The deaths of seven COVID-19 patients in their 50s to 90s were also reported in Tokyo on Aug. 20.

The average number of diagnostic tests conducted in the capital over the three days through Aug. 19 stood at 16,390.

The number of serious cases in Tokyo requiring ventilators or extracorporeal membrane oxygenation, also known as an ECMO lung bypass machine, dropped by one from the previous day to 273 on Aug. 20.

The Kyoto prefectural and municipal governments reported 548 new infection cases, including 380 in the city, exceeding the 500 mark for the first time. Osaka Prefecture confirmed 2,586 infections, setting a new record for the fourth consecutive day, while Kanagawa Prefecture tallied a record 2,878 cases.