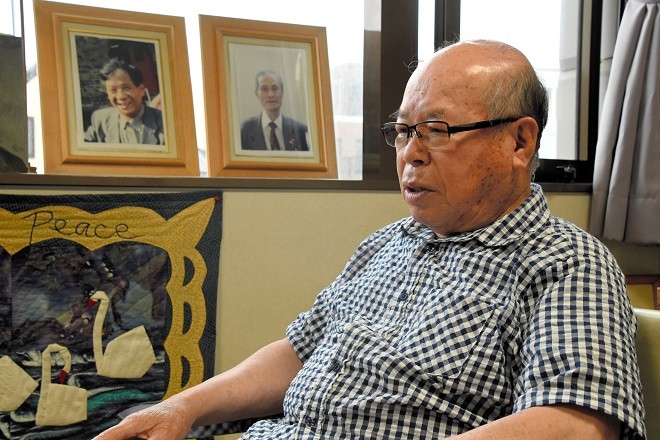 Shigemitsu Tanaka, head of the Nagasaki Atomic Bomb Survivors Council, poses on June 15 at the organization’s office in Nagasaki, where photos of its past presidents, including Senji Yamaguchi, left background, and Sumiteru Taniguchi, are displayed. (Yuichiro Yoneda)

NAGASAKI--On a sweltering day in mid-July, 80-year-old Shigemitsu Tanaka was busy traveling around the city meeting with donors.

Despite the summer heat, the head of the Nagasaki Atomic Bomb Survivors Council wanted to convey his gratitude in person to the groups that made donations after learning about his organization’s strained finances.

“We may become unable to continue with our activities as soon as today or tomorrow,” Tanaka said, expressing concern about the urgent situation facing his organization.

He and other survivors of the 1945 atomic bombing of this western city are struggling to keep alive their advocacy efforts after the pandemic dealt a major blow to their finances and fund-raising efforts.

And although hibakusha themselves have traditionally played a core role in efforts to assist other atomic bomb survivors, the movement now finds itself at a crossroads due to their advanced age and weakened organizations 76 years after the bombing.

Tanaka’s organization has long led the hibakusha victims’ movement in Nagasaki, but found itself forced to shut down its souvenir shop that raises funds for its outreach campaigns.

The council was established by hibakusha in Nagasaki to push for state compensation for victims in 1956, when a U.S. thermonuclear test program prompted them to protest against atomic and hydrogen weaponry throughout Japan.

The following year, it had opened the souvenir store to sell handmade dolls and other goods so it could provide employment for those with disabilities caused by the Nagasaki bombing.

But just before the group’s 65th anniversary, the novel coronavirus outbreak last year began to rock the foundation of the council.

The souvenir shop operator in Nagasaki, which had been commissioned by the group for roughly two decades, ended its business in September 2020 because of plummeting sales brought on by the pandemic.

A year has since passed but no successor has come forward.

The council’s members also provide lectures for students visiting Nagasaki on school trips, but the number of those sessions has dramatically declined.

As a result, the group’s revenue has dropped 80 percent, forcing it to rely on donations to remain operational.

A main pillar of the group’s activity is offering support to victims.

The atomic bomb survivor’s medical treatment law was introduced in 1957 that made those possessing hibakusha certificates eligible for specialized health checkups and health care subsidies.

But there were strict requirements for obtaining the certificate.

So, the group’s members reached out to lawmakers and other officials nationwide to push for expanding the scope of eligibility.

The group’s other pillar is pushing for the abolition of nuclear weapons.

Senji Yamaguchi, one of the co-founders of the council who died in 2013, and Sumiteru Taniguchi, who served as the council’s chairman for 11 years and passed away in 2017, have brought their stories to the U.N.’s headquarters and around the world to give firsthand accounts of how nuclear weaponry is inhumane.

The Treaty on the Prohibition of Nuclear Weapons took effect in January this year, and the Japanese word “hibakusha” is even included in the pact, showing proof their hard work paid off.

In Nagasaki, five hibakusha groups, including the council, had been working separately to better support survivors and promote peace. Some 15 years ago, they started working together to protest nuclear tests.

Every year, on the anniversary of the U.S. atomic bombing of Nagasaki on Aug. 9, the group’s leaders convey their joint request to the prime minister.

The organizations, most of whose members are hibakusha, work mainly on membership fees and donations. But their advancing age and shrunken membership mean that funds for activities have been drastically reduced.

Three of the five hibakusha organizations receive subsidies from Nagasaki city and Nagasaki Prefecture. But only entities headed by hibakusha are covered by the assistance programs and few survivors are currently executives in the groups.

“Few hibakusha are in good enough health that they can serve as organizational chairs,” said Tamashii Honda, 77, president of a group of the bereaved families of Nagasaki atomic bomb victims. “An extremely limited number of personnel can head such organizations.”

A Nagasaki city representative said the rule may be reviewed in the future.

“Such topics as how ‘hibakusha groups’ are actually defined under the subsidy package, and whether organizations with few hibakusha can be called hibakusha groups, will come up for discussion.”

Despite all these difficulties facing the movement and the tough tasks that lie ahead for them, Tanaka continues to wear down his shoes for the cause.

He said he recalled the faces of Yamaguchi, Taniguchi and other hibakusha who have passed on and renewed his resolve to not stop until the survivors’ shared goals of nuclear abolition and state compensation are achieved.