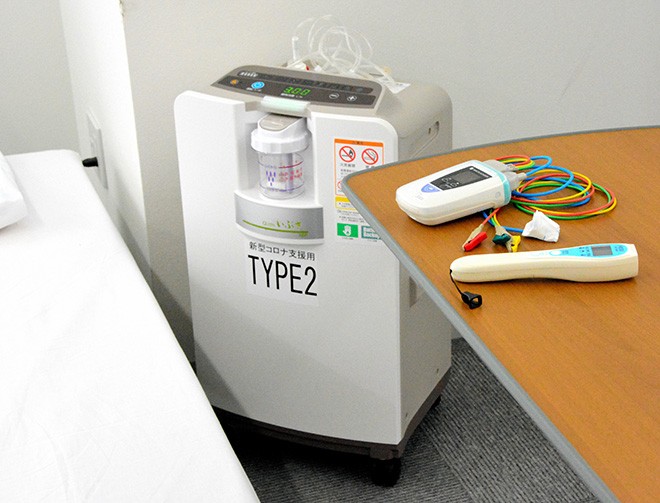 An oxygen concentrator at the bedside of a patient with COVID-19 at Heisei-Tateishi Hospital in Tokyo’s Katsushika Ward in July. (Momoko Ikegami)

At least 18 COVID-19 patients have died at home in the Tokyo metropolitan area since July due to a lack of available hospital beds, an Asahi Shimbun study found.

The deaths serve as a fresh reminder of the urgency of securing ways to promptly provide care to patients at home whose condition suddenly deteriorates.

In Tokyo and its neighboring prefectures of Kanagawa, Saitama and Chiba, there were three such incidences in July, according to the study. The number jumped to 15 in August.

Half of the 18 fatalities were patients in their 50s or younger, the study showed.

As Japan grapples with its fifth and largest wave of novel coronavirus infections, 96,857 patients nationwide were recuperating at home as of Aug. 18 without access to hospital care. This is because public health centers initially assessed that their symptoms were not sufficiently serious to warrant hospitalization.

It is not uncommon among patients with COVID-19 for their health condition to abruptly deteriorate to the point they need emergency treatment at a medical center.

Public health centers are in charge of determining which patients should be hospitalized and finding hospital beds for them. But a surge in caseloads has made it increasingly difficult for medical centers to admit patients who potentially may develop grave health issues.

For the study, the Asahi contacted authorities in Tokyo and the three prefectures, as well as Osaka and Okinawa prefectures, to ascertain the number of patients who died while staying home while fighting the disease. All the prefectures are under a state of emergency.

Patients found dead at home or who died after being rushed to a hospital following a rapid worsening of their condition were counted in the study.

In Tokyo, there were nine such deaths, one in July and eight in August.

Of those, six patients were in their 50s or younger, including a man in his 30s with no underlying health problems.

In Kanagawa Prefecture, a man in his 60s and another in his 40s died in July. This month, a woman in her 60s died.

In Saitama Prefecture, three men--one in his 40s, one in his 50s and another in his 70s--died while recuperating at home in August.

The infection of the man in his 50s was confirmed on Aug. 10. He had a pre-existing health condition. But he was recuperating at home as his symptoms were assessed as mild. He was found dead on the morning of Aug. 15.

Three patients, two men in their 60s and a woman in her 80s, died in Chiba Prefecture this month.

The woman contracted the virus in late July and stayed home because she reportedly showed no symptoms. Prefectural officials began searching for a hospital bed for her after her blood oxygen saturation level plunged to below 90 percent on the evening of Aug. 10. The normal level is 96 percent or more. Her death was confirmed that night. No hospital bed had been found for her.

Osaka and Okinawa prefectures replied that no patients staying home have died since July. In the case of Osaka Prefecture, there were 19 such deaths between March 1 and June 20 during the fourth wave of infections.

According to the health ministry, 84 COVID-19 patients died at home nationwide in the first half of this year. Of the total, 71 were in their 60s or older.

(This story was written by Shun Niekawa, Yuta Ogi and Daizo Teramoto.)