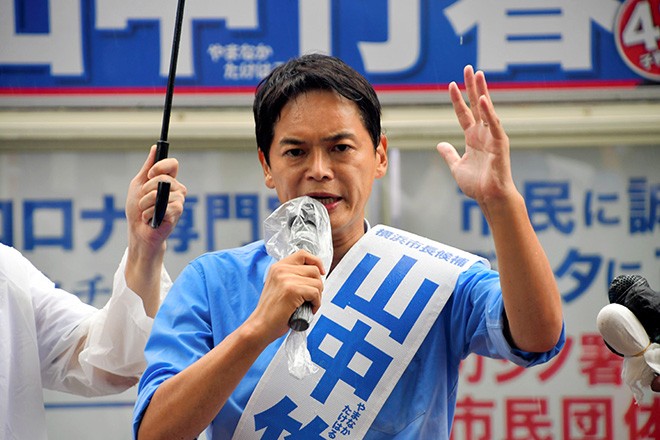 Takeharu Yamanaka’s victory dealt a serious blow to Suga as it will almost certainly fuel calls to replace him as head of his Liberal Democratic Party.

Yamanaka, 48, a former professor of health data science at Yokohama City University, wooed voters with his “adamant opposition” to the city’s bid to host a casino-centered integrated resort and calls to prioritize measures to contain the spread of the novel coronavirus.

The election was closely watched by politicians at the national level who viewed it as a bellwether for a crucial Lower House election scheduled in the weeks ahead.

Although he ran as an independent, Yamanaka had the support of the main opposition Constitutional Democratic Party of Japan, eager to see its candidate entrenched in the city where Suga’s constituency is based.

Okonogi, 56, also campaigned to halt the city’s plan to host the casino project.

The election outcome had important implications as the prime minister struggles with dismal public approval ratings over his government’s handling of the pandemic, now at its most critical stage.

Voter turnout was 49.05 percent, compared with 37.21 percent in the previous election four years ago. A record eight candidates ran in the election.

A majority of Yokohama residents are opposed to the casino project.

Suga, since he served as chief Cabinet secretary under his predecessor, Shinzo Abe, has championed the project as a way to lure more tourists to the city.

Despite Okonogi’s opposition, Suga decided to endorse him as his overriding goal was to block a candidate backed by the opposition camp from taking office as mayor on his home turf.