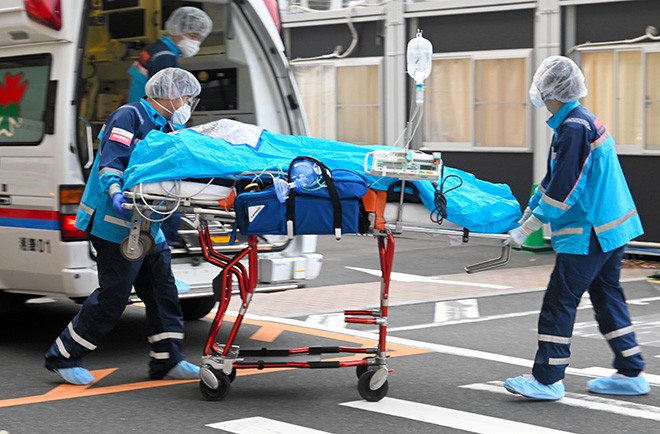 A novel coronavirus patient is transported to a hospital for treating those with serious symptoms in Kamakura, Kanagawa Prefecture, on Aug. 11. (Asahi Shimbun file photo)

With the numbers of newly confirmed novel coronavirus cases and COVID-19 patients with serious symptoms hitting record highs day after day, a shortage of hospital beds is growing into a serious problem.

Setting up oxygen stations for providing oxygen to patients and facilities for treating patients with antibody cocktails will help, but these treatments should basically be administered at hospitals.

To save patients who are in a serious condition, it is crucial to increase the number of beds equipped with ventilators and other medical devices.

It is also vital to increase facilities that accept patients who have recovered so that facilities for treating serious cases can be used efficiently. The central government should spearhead these efforts.

The number of hospital beds available for COVID-19 patients in Japan has increased about 20 percent since early spring. But these are not enough to deal with the latest surge, which is far worse than the health ministry anticipated. The ministry should be criticized for underestimating the scale of the fifth wave of infections.

Especially worrisome is the declining availability of beds for patients with serious symptoms. In Tokyo, 70 percent of such beds are already occupied. Even if the growth in new infections is curbed to some extent, the beds will be filled by late August and remain so until early October, according to an estimate by one expert.

At an Aug. 17 news conference, Prime Minister Yoshihide Suga pointed out this provision is “not widely used,” indicating his intention to promote this approach.

Medical institutions have a social duty to actively contribute to the health of local residents. Health care workers betray their professional ethics if they remain indifferent to efforts to ride out this public health crisis.

But it is unlikely that strong actions such as publishing the names of institutions refusing to cooperate will work.

The challenge is to map out an effective strategy to make more beds available for COVID-19 patients.

While local governments have to develop their own plans according to the local conditions, the central government needs to sort out key issues that have to be addressed and show a road map to overcome them.

For example, if a hospital treating seriously ill COVID-19 patients plans to accept more such patients, its operations for general treatment will inevitably be affected.

A system must be established to share the burden by arranging for other medical institutions to take over some general health care functions and ensure smooth expansion of the overall capacity to handle severe cases.

Experts have pointed out existing shortages of nurses and doctors even if beds are available. Unless this problem is solved, setting up emergency medical facilities will not make a difference.

The central government must be involved in developing and executing comprehensive plans to deploy limited numbers of health care workers in the most effective way and provide appropriate rewards and incentives for their services.

The panel of experts advising the government on responses to the pandemic has called on health care workers and medical institutions that have not been engaged in efforts to contain the virus to get involved in the battle while understanding the roles they should play.

We urge the government and the Diet to immediately start debate on what kind of policy support should be provided and on whether laws and regulations need to be revised. Then policymakers and lawmakers should take necessary actions in line with the conclusions of the debate.