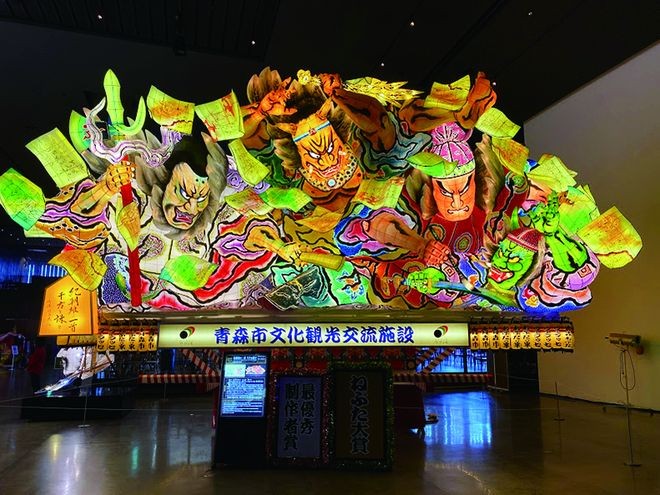 A full-size float is displayed at the Nebuta Museum Wa Rasse in Aomori. The facility introduces the history and charm of the Aomori Nebuta Festival along with four floats previously paraded in the festival. (Photo by Lisa Vogt)

"Iroppoi"--I love the sound of this word. To my ears, it’s not quite as in-your-face as “sexy.” I find men and women in "yukata" cotton summer kimono to be, under certain circumstances, like at a festival, iroppoi.

The kanji for color, "iro," is an ideograph depicting a couple uniting as one in a circle. So, what’s this column about? A festival that unfortunately is again canceled this year because of COVID-19.

Festivals transform drab, ordinary days to magical, colorful ones. And it also has a “subplot”--it’s an opportunity for individuals searching for romance to find each other.

At the Nebuta Museum Wa Rasse in Aomori, I learned that the Aomori Nebuta Festival is held every Aug. 2 to 7. Twenty colossal "nebuta" floats specially made for that year’s festival are paraded through the streets by yukata-clad groups of people chanting, “Rasserah! Rasserah!” accompanied by flutes and drums. Often on the floats are legendary figures and animals that depict a historical or mythological story.

The floats are constructed with frameworks made of wood and wire, which are covered with special paper and vividly painted. Lights are placed inside, and the nebuta is illuminated from within. These gargantuan nebuta are 9 meters long, 7 meters wide and 5 meters high, and they weigh 4 tons.

Male and female dancers called "haneto" (jumping persons) rhythmically dance alongside the float. The steps are easy and anybody wearing the proper costume is welcome to join in.

Many theories abound as to the festival’s origins. It probably comes from an ancient exorcism rite during Tanabata, when small candle boats were released on a river ("toro-nagashi"). Nebuta means “sleepy” in the local dialect, and it is said to be derived from the traditional Nemuri Nagashi event to send away the sleep demon who makes people drowsy during busy times.

Japan has always had the folk tradition of passing impurities into dolls or paper. In the past, on the last day of the festival, July 7 in the old lunar calendar, the nebuta were set upon the ocean to sail away. Now, with environmental concerns, they are sent to large industrial waste disposal sites, which don’t sound very sexy.

Imagine being dressed in a yukata on a hot summer evening, watching the warm glow of the colorful nebuta on floats passing by. You notice someone looking at you, and your eyes meet.

All the commotion around you is silenced and the moment comes to a standstill. You sense "iroke" in the person. Lantern. Festival. Yukata. Cupid. Ahh.

This article by Lisa Vogt, a Washington-born and Tokyo-based photographer, originally appeared in the July 18 issue of Asahi Weekly. It is part of the series "Lisa’s Wanderings Around Japan," which depicts various places across the country through the perspective of the author, a professor at Meiji University.