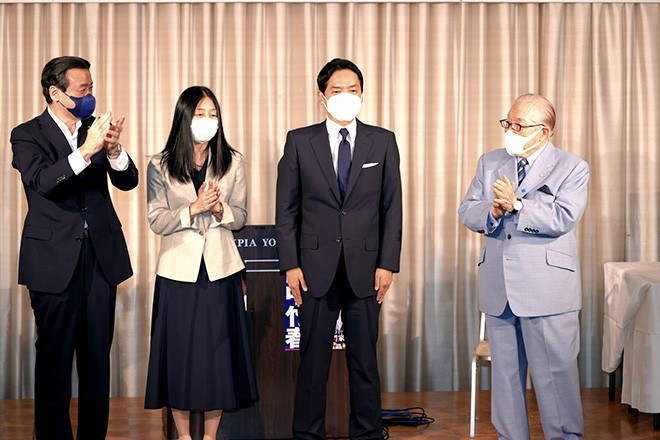 Supporters applaud after it became certain on the night of Aug. 22 that Takeharu Yamanaka, third from left, would win the Yokohama mayoral election. (Toshiyuki Hayashi)

When eight candidates lined up in the Yokohama mayoral race, the city's controversial plan to host a casino-centered integrated resort figured to be the hot button issue, given the widespread opposition among residents.

But in a surprise, Takeharu Yamanaka, a former college professor, emerged with the winning hand, defeating a candidate endorsed by Prime Minister Yoshihide Suga by a big margin in his own backyard and the incumbent mayor.

Yamanaka played his cards right in touting himself as an "expert on the coronavirus" as COVID-19 cases in Kanagawa Prefecture, whose prefectural capital is Yokohama, surged to record levels leading up to the Aug. 22 election.

An exit poll of voters conducted by The Asahi Shimbun showed that 36 percent of respondents, or the largest share, chose the public health crisis as the issue they wanted the new mayor to address most when asked to pick from six choices.

This was invariably the case with supporters of Suga’s Liberal Democratic Party and nonaffiliated voters.

The exit poll found that 46 percent of voters who cited response to the coronavirus as the most pressing issue cast their ballots for Yamanaka, 48, a former professor of health data science at Yokohama City University.

Voter turnout was 49.05 percent, up 11.84 percentage points from the previous election four years ago.

Unaffiliated voters accounted for 43 percent of those who went to the polls, making them the largest group, the exit poll showed.

Yamanaka, who ran as an independent with support from opposition parties, gained 39 percent of unaffiliated voters. The comparable figures for Okonogi and Hayashi were 10 percent and 12 percent, respectively.

Okonogi, former chief of the National Public Safety Commission, was put at a disadvantage from the start. He ran under the banner of halting the casino project, running counter to the position of LDP members of the city assembly and Suga.

Even with Suga's endorsement of Okonogi, the local LDP forces were divided over whether they should support the candidate. LDP supporters were ultimately left to vote on their own.

Hayashi garnered 41 percent of voters who support the casino project. However, only 26 percent of the total electorate embrace the project, which is seeking to host a casino-based resort at Yamashita Pier.

Of the voters opposing the project, 20 percent cast their ballots for Okonogi.

But the number was too small, compared with the 45 percent of opponents that Yamanaka connected with.

As days went by, the coronavirus issue weighed more and more on residents' minds, an exit poll of early voters by the Asahi showed.

The poll conducted on Aug. 9, the day after the two-week campaign period began, showed that 29 percent thought the coronavirus issue should be the top priority for the new mayor.

The figure grew to 36 percent in an exit poll of early voters on Aug. 21.

The daily count of newly confirmed infections in Kanagawa Prefecture began topping 2,000 from the middle of campaigning, heightening a sense of alarm among voters. On Aug. 20, the prefecture reported a record 2,878 new COVID-19 cases.

More voters showed up at polling stations than in the previous election as they were eager to express their displeasure with the failure of elected officials’ handling of the pandemic.