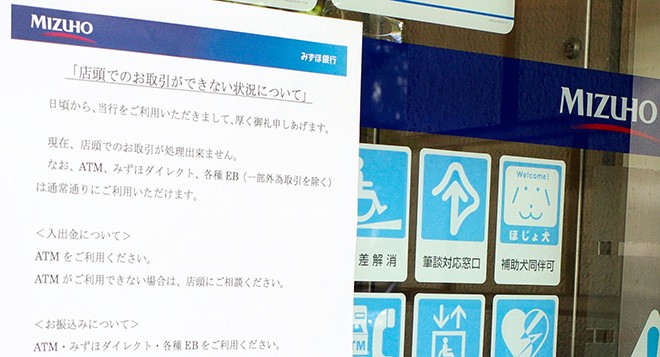 A sign at a Tokyo branch of Mizuho Bank on Aug. 20 informs customers that transactions involving a teller have been suspended. (Toshio Tada)

The Financial Services Agency has ordered Mizuho Bank to submit a report under the Banking Law on its fifth system failure of the year, sources said.

The regulatory agency issued the order to Mizuho Bank, Mizuho Trust & Banking Co. and their parent company, Mizuho Financial Group Inc., demanding they report on how and why the glitch occurred by the end of this month, according to sources.

The FSA is taking the series of service-disrupting computer problems at Mizuho Bank seriously and will investigate into the effectiveness of the measures the bank put in place to prevent it from happening again.

The FSA has repeatedly ordered the bank to report on the problems and conducted thorough inspections on its computer system.

The agency was already planning to issue a business-improvement order to both Mizuho Bank and Mizuho Financial Group under the Banking Law because of those past problems.

But the latest computer glitch will likely prompt the FSA to consider taking further steps after receiving a report on the matter from the companies.

In June, Mizuho announced new measures to prevent the problems from reoccurring, including inspecting its entire computer system. The measures were based on an investigative report on the four system failures released by a third-party panel. The FSA suspects the latest problem occurred because those measures failed to work sufficiently.

Eleven executives at Mizuho Financial Group took pay cuts as a result of the spring service disruptions. But Mizuho will need to further clarify responsibility for the repeated glitches in addition to producing more effective countermeasures by determining the cause of the fifth system failure.

The latest problem occurred at around 9 p.m. on Aug. 19 because of malfunctioning equipment that connects Mizuho’s core computer system with its branches. Officials tried to replace it with a backup but failed. The system failure was solved at around noon on Aug. 20.

The glitch disrupted deposits and money transfers for customers who visited bank counters at about 460 branches of Mizuho Bank and Mizuho Trust & Banking. Mizuho informed customers of the problem only 30 minutes before it began providing services for the day on Aug. 20.

(This article was written by Kuniaki Nishio and Yuji Yamashita.)