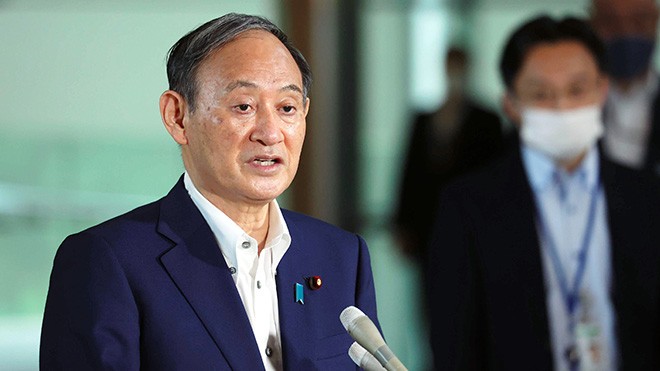 Even on his home turf, the backing of Prime Minister Yoshihide Suga failed to rally his ruling Liberal Democrat Party around his chosen candidate in the Yokohama mayoral election.

Hachiro Okonogi, the former chairman of the National Public Safety Commission, failed in his bid on Aug. 22, raising questions about Suga’s political clout with his party leadership and Lower House elections on the horizon.

“It is truly a disappointing result,” Suga told reporters at the prime minister’s office in Tokyo on Aug. 23. “(The local voters) made their judgment over various problems that the Yokohama municipal government has, such as the COVID-19 pandemic. I would like to humbly accept this loss.”

But Suga remained unbowed and is planning to seek re-election in the upcoming LDP presidential election.

Takeharu Yamanaka, endorsed by the main opposition Constitutional Democratic Party of Japan, won the Yokohama mayoral election with 506,392 votes. Okonogi, 56, finished well behind in second with 325,947 votes, followed by the incumbent mayor, Fumiko Hayashi, with 196,926.

Voter turnout was 49.05 percent, compared with 37.21 percent in the previous election four years ago. A record eight candidates contested the election.

With the fifth wave of COVID-19 cases far from subsiding, that could hinder the possibility of Suga dissolving the Diet as he wishes before the members' terms expire in two months.

Yokohama is Suga’s home territory, but even he could not unite the LDP for the mayoral election. LDP supporters remained divided and supported different candidates in the election.

With Okonogi’s loss, that makes it more difficult for the prime minister to unify his party.

Suga’s term as LDP president will end on Sept. 30. Campaigning in the LDP presidential election is being scheduled to start on Sept. 17, with the vote set for Sept. 29.

Toshihiro Nikai, the LDP secretary-general, and Shinzo Abe, the former prime minister, have declared their support for Suga’s re-election.

However, in April the LDP lost three elections of the Upper and Lower houses, while in July it claimed just the second fewest seats in the Tokyo metropolitan assembly election. Then, it lost again in the Yokohama mayoral election.

More LDP lawmakers who will run in the Lower House election are questioning Suga’s effectiveness as party leader.

There is strong opposition against his initial plans to dissolve the Lower House before the LDP presidential election and it is unlikely that he will run uncontested for re-election.

As more LDP lawmakers call on replacing the prime minister or the party leadership, the LDP presidential election will be more likely to be held before the Lower House election with other contestants.

Depending on the political situation, he could be forced to effectively hold the Lower House election at the expiration of its members’ terms.

The opposition parties had said that the Yokohama mayoral election will “question the Suga administration.”

Yamanaka, the candidate they backed with a united front, won, so they are planning to follow the same cooperation strategy for the next Lower House election.

Yamanaka, 48, gave a victory speech after he was declared the winner of the Yokohama mayoral election just after 8 p.m. on Aug. 22. He had campaigned vigorously on being a coronavirus expert and also opposing Yokohama’s plan to host a casino-centered integrated resort.

“I felt that local citizens strongly desire for the new coronavirus to be contained,” Yamanaka said. “As for the Yokohama municipal government, I will declare at the early stage that we won’t seek to host a casino.”

During the election campaign, Yokohama city confirmed more than 1,000 COVID-19 daily fresh cases for the first time, rising at an explosive pace.

Yamanaka, a former professor of health data science at Yokohama City University, had led a research team on neutralizing antibodies for COVID-19. He said as the only COVID-19 expert among all the candidates that, “we will contain the coronavirus in Yokohama using my expertise.”

During the election campaign, he had repeatedly said that COVID-19 countermeasures should be taken based on scientific methods.

“The municipal government does not function well and it is a problem of politics,” he said. He criticized the incumbent Hayashi, 75, and also the central government.

Initially, he was at a disadvantage with little of the media spotlight on him.

But Yoichiro Aoyagi, a CDP lawmaker elected from a district of Kanagawa Prefecture, said, “More and more people supported him as infection cases were soaring.”

Yamanaka made it clear that he will follow through his stated opposition to hosting a casino-centered integrated resort.

“I absolutely oppose it and will immediately withdraw the plan,” he said.

He gained support not only from the Japanese Communist Party and the Social Democratic Party but also from a citizens’ group calling for a referendum on the casino plan, the Yokohama Port Harbor Resort Association and the Kanagawa Local of Japanese Trade Union Confederation.

Okonogi also opposed the casino project during the election campaign. He had been considered to be a close ally of Suga, a promoter of the casino resort plan, but he also vowed to cancel the project in Yokohama.

While the confusion spread, the LDP’s municipal branch decided not to endorse Okonogi and allowed its members to vote freely. Some city assembly members supported Hayashi’s re-election bid.

Suga said that he would support Okonogi without mentioning their opposing positions on the casino issues. But Suga was unable to forge cooperative ties with supporters.