Russian man reportedly swims to Hokkaido to defect to Japan 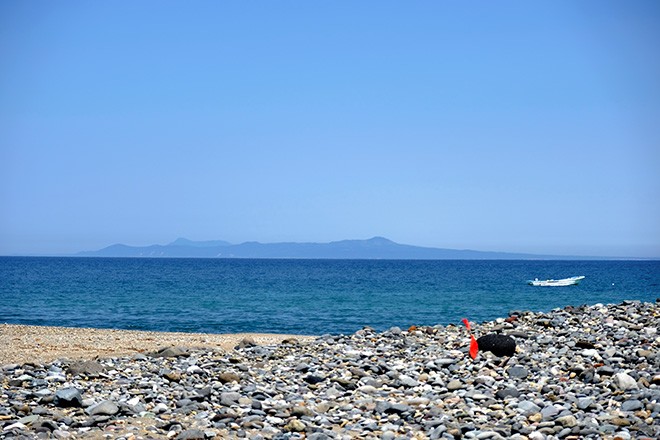 The coast of Shibetsu, a town in Hokkaido just across from Kunashiri island, (seen in rear), and part of the Northern Territories administered by Russia but also claimed by Japan. (Masami Ono)

SHIBETSU, Hokkaido--A Russian man who reportedly swam about 20 kilometers to Hokkaido seeking asylum was taken into police custody here on Aug. 19 after arriving that day, according to Russian news agencies and other sources.

The man “apparently swam in a wet suit” to cross the sea and wants to defect to Japan, the Russian news agency RIA Novosti reported, quoting a source familiar with the incident.

The man lives on Kunashiri island, one of four disputed islands administered by Russia but also claimed by Japan which Japan calls the Northern Territories, off the northeast coast of Hokkaido.

In a search of his home, “posters of Japan and other items were discovered, indicating that he is a fan of Japanese culture,” a local Russian official told the Interfax news agency.

Based on the information that he sought asylum in Japan, Japanese immigration officials contacted the Russian Consulate-General in Sapporo, informing them that they were currently trying to establish his identity, including nationality.

According to Russia’s Interfax news agency, authorities of the Southern Kuril District of the Russia’s Sakhalin State, which administers Kunashiri, the man is around 40.

He is originally from Izhevsk, the Udmurt Republic, in the Urals in western Russia.

Izhevsk is known for manufacturing the AK-47 assault rifle.

The man moved to Kunashiri three years ago and acquired a plot in the island’s southernmost district under a Russian program that offers 1 hectare of land in the Far East region for free to applicants.

The district is the closest part of the island to Shibetsu.

He lived in the village of Dubovoe and elsewhere, occasionally working as a tractor driver.

The man “has not been seen since Aug. 17,” the local Russian official told Interfax.

The official confirmed that the man appeared in Shibetsu on Aug. 19 and was taken into custody.