EDITORIAL: Paralympics could not have come at a worse time 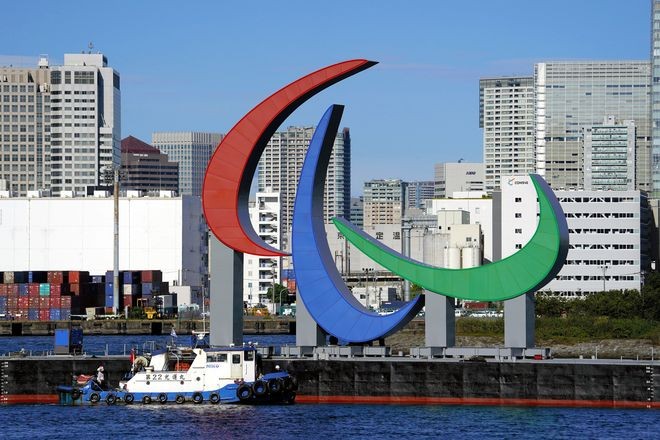 The Paralympic logo is on display off Odaiba Marine Park in Tokyo’s Minato Ward on Aug. 20. (Asahi Shimbun file photo)

The Opening Ceremony for the Tokyo Paralympics kicks off today, even as the capital's health care system is on the brink of being overwhelmed by the latest surge in new COVID-19 cases.

Experts are warning the public that it is up to them to take steps to protect their own lives. Given the situation, it is hard not to feel doubt and anxiety about holding another massive international sporting festival so soon after the Tokyo Olympics. The event involves the participation of athletes from around the world and thousands of related personnel.

But organizers and policymakers decided against canceling the Paralympics in the belief it would run counter to the Paralympic ideal of building an inclusive and integrated society. Partly driven by this thinking, they continued preparing for the Paralympics without holding in-depth debate on what's at stake after the end of the Olympics.

Seeing as they decided to forge ahead with the Paralympics, political leaders and government policymakers have a duty to ensure that the health of visitors and citizens will be protected.

The Olympic competitions caused the public at large to lower their guard against the virus. Organizers and policymakers need to avoid making the same mistake again by sending out effective messages about health risks and ensuring safe operations of the competitions and other related events.

Some Paralympic athletes have underlying medical conditions due to lung, heart and other severe physical disabilities. These conditions can put them at higher risk of developing severe illness from the virus. Some types of disabilities are known to interfere with thermoregulation. Greater care and closer monitoring to prevent heatstroke is essential for athletes with such disabilities.

The success of the Paralympics will depend on the effectiveness of measures to prevent infections and protect athletes and others involved against the extreme summer heat.

Examining and assessing the measures taken at the Olympics to ensure this happens is an absolute must. But the Olympic organizing committee continues to stick to its mantra that nothing unexpected happened during the event. It also has not adequately disclosed pertinent information. Its reluctance to be open to outside scrutiny remains unchanged.

When Olympic personnel committed violations of the code of conduct, the committee failed in most cases to make serious efforts to clarify the facts and take appropriate action. This attitude has bred distrust. Unless it changes its stance toward such violations during the Paralympics, the public is hardly likely to offer strong support to the event.

One source of concern is the Paralympic organizer’s plan to invite more than 100,000 children from elementary, junior and senior high schools to attend events, despite its decision to ban general spectators from attending the competitions. Both the national and metropolitan governments are keen to carry through with the plan.

We do not deny that children will benefit greatly from watching live competitions among top Paralympic athletes. But the number of new COVID-19 cases among children is also growing.

It goes without saying that the local governments and schools involved should listen to the opinions of health experts and cautiously weigh the pros and cons in a responsible manner. They also need to respect the intentions of the children and their parents to ensure that they will not feel under undue pressure to attend the events.

A senior member of the government’s task force to promote the Olympics and Paralympics recently resigned amid allegations of having had a cozy relationship with a sports club. But the government has yet to offer any detailed information about the scandal.

Such dubious acts and cover-up attempts involving policymakers and Olympic executives, which undermine the value of the event, stand in sharp contrast with the brilliant and amazing performances of athletes.

Paralympic athletes compete in a wide range of events better suited to their needs. As we see these athletes’ efforts and struggles to overcome the challenges due to their disabilities superimposed on our own lives, we will be even more amazed at the human potential and inspired by their performances.

A growing number of people are taking an interest and finding enjoyment in Parasports as pure athletic competitions. We wish for safety and good luck for all the athletes attending the event.