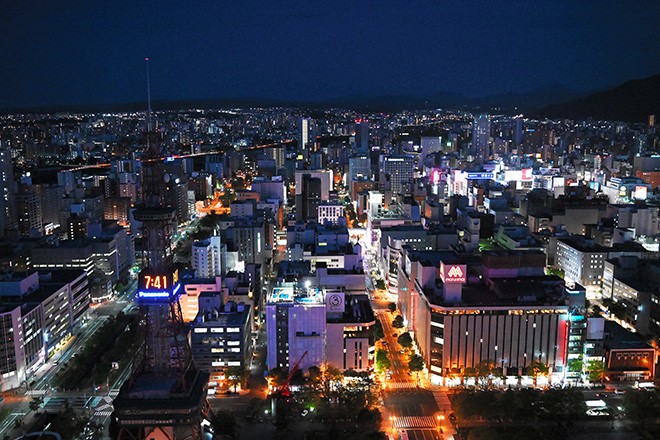 Lights are turned off at Sapporo TV Tower, a landmark in Sapporo, seen lower left, as part of measures to prevent novel coronavirus infections in May. (Asahi Shimbun file photo)

The government is moving to expand a COVID-19 state of emergency to cover Hokkaido and three prefectures in the Tokai region, according to sources.

The northernmost main island, along with Aichi, Gifu and Mie prefectures, asked the central government late last week to issue an emergency declaration. They are currently under pre-emergency measures.

The government will also consider adding other prefectures to the list of areas covered by the state of emergency after consulting health experts and monitoring the infection situation.

A decision is expected as early as Aug. 25.

Hokkaido asked the central government on Aug. 19 to issue a state of emergency, while Aichi made the request the following day. Gifu and Mie followed suit on Aug. 21.

Kato said at an Aug. 23 news conference the government will decide whether to expand the emergency declaration as soon as it receives requests from local governments.

It will also consider whether to grant a request from Miyazaki Prefecture to apply pre-emergency measures to the area.

The current state of emergency covers Tokyo, Osaka and 11 other prefectures, while pre-emergency measures are in place in Hokkaido and 15 prefectures. Both measures will continue until Sept. 12.

The National Governors’ Association on Aug. 20 submitted a list of recommendations to the central government. It is urging the government to expand the emergency declaration and pre-emergency measures to cover the entire nation and enable governors to quickly take anti-virus measures according to the needs of each area.

The association is also calling on the government to adopt restrictions, like “lockdowns,” to curb the flow of people, saying it is obvious that a state of emergency is no longer effective in its current form.