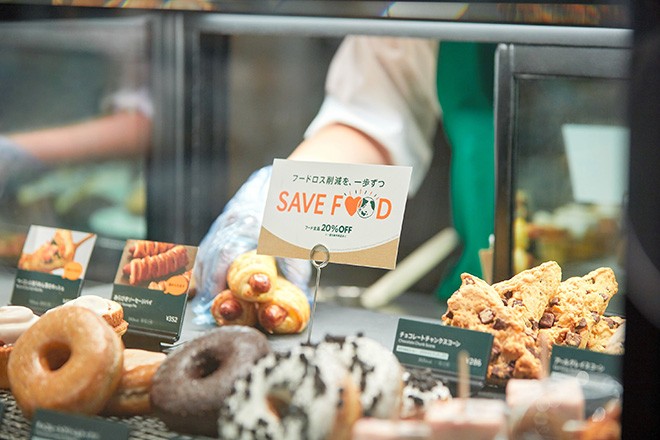 A sign showing items are offered at a discount price at a Starbucks store (Provided by Starbucks Coffee Japan Ltd.)

The coffeehouse chain's stores around the country on Aug. 23 began offering the discounts before closing.

Starbucks is reducing the price of food items nearing best-before dates by 20 percent if they remain unsold around three hours before store closures. Store staff will put signs inside showcases to show they are selling the items at a reduced price. Discounts are offered only at stores.

The outlets will decide whether to reduce the price depending on the amount of unsold items each day and may not always offer discounts, according to the company.

Expired food items, such as doughnuts, cakes and sandwiches, account for about 15 percent of the food waste at Starbucks stores.

The company offered the discounts at some 90 stores in Tokyo and Saitama Prefecture in March on a trial basis, and, at times, the amount of waste was reduced to less than half the level before it introduced the initiative.

Starbucks says it is aiming to help protect the environment and fulfill corporate social responsibility through the effort.

The company says it will donate some of the proceeds from sales of the discounted items to the Tokyo-based nonprofit organization Musubie, which supports children’s cafeterias around the country.