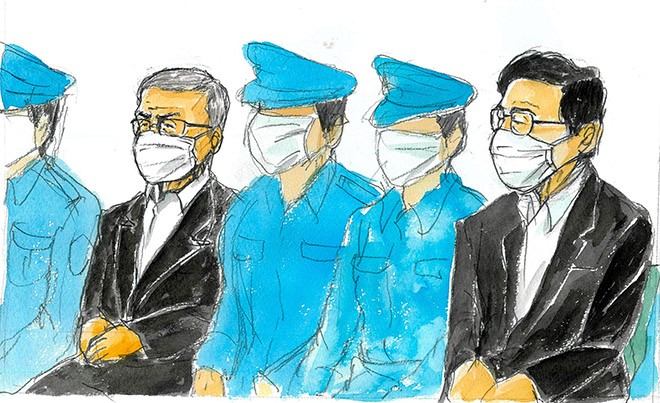 A drawing of Satoru Nomura, left, and Fumio Tanoue at the Fukuoka District Court on Aug. 24 (The Asahi Shimbun)

FUKUOKA--In a high-profile trial, the head of an organized crime syndicate often described as the most violent in Japan was sentenced to death at the Fukuoka District Court on Aug. 24.

Satoru Nomura, 74, the head of the Kudo-kai gang based in Kita-Kyushu in Fukuoka Prefecture, was handed the death penalty for his involvement in four violent incidents, one of which an individual died.

The court said in the ruling that Nomura and Tanoue conspired to carry out the four attacks. Nomura gave an order in the murder case, and the other three crimes were carried out under a chain-in-command structure headed by Nomura, the court said.

The Fukuoka District Public Prosecutors Office had sought the death penalty for Nomura, and a life sentence for Tanoue along with a fine of 20 million yen ($182,200).

There was no clear direct evidence to connect Nomura and Tanoue to the four cases, while those who actually carried out the crimes have been convicted.

Both Nomura and Tanoue have denied their involvement and claimed their innocence.

Nomura was displeased with the court’s sentence and seemingly threated the presiding judge.

After the court was vacated, Nomura told Adachi, “I asked you for a fair judgment. But this is not fair at all. You will regret this for the rest of your life.”

Tanoue also said, “You are awful, Mr. Adachi,” as he left the courtroom.

It was apparently the first time for prosecutors to seek a death penalty for a head of a gang recognized by the Prevention of Wrongful Acts by Members of Organized Crime Groups Law.

The court’s decision to grant the prosecution’s demand is expected to impact future investigations of organized crime groups.

CRIMES DATED BACK MORE THAN 20 YEARS

The first of the four assaults occurred in 1998. A former leader of a local fishery cooperative, who was 70, was gunned down and killed on the streets of Kita-Kyushu.

The second occurred in 2012. A former Fukuoka prefectural police officer was shot in Kita-Kyushu.

The third occurred in 2013 in Fukuoka, in which a female nurse at a medical clinic where Nomura was seeking treatment was stabbed.

The fourth took place in 2014, in which a male dentist who happened to be a relative of the former fishery cooperative leader was stabbed in Kita-Kyushu.

Prosecutors argued that each of the four incidents was a coordinated attack by the Kudo-kai, and both Nomura as the mastermind and Tanoue as the group’s No. 2 sanctioned the acts through the gang’s chain-of-command structure.

While gang underlings may have been the ones who actually carried out the attacks, as the head of an organization in which the boss’s orders were absolute, Nomura and Tanoue held the ultimate responsibility, prosecutors argued.

The two were charged with murder, a coordinated attempt to murder and weapons violation.

Prosecutors argued that the first and fourth crimes stemmed from Nomura’s desire to get his hands on economic interests held by a fishery cooperative. But the former leader rebuffed Nomura’s overtures.

The shooting and the stabbing, occurring 16 years apart, were attempts to intimidate family members who controlled the economic interests and force them into submission.

The second attack was an obvious attempt to put pressure on local law enforcement that had launched a crackdown on the Kudo-kai.

The third assault was triggered by Nomura’s dissatisfaction with the nurse who treated him at a clinic, prosecutors said.

Those who actually carried out the crimes have already been convicted. In all trials except the one for the murder of the former fishery cooperative head, the courts recognized the existence of a chain-in-command system headed by Nomura and Tanoue.

One of the major points in dispute in the latest trial was whether both Nomura and Tanoue gave direct orders to commit the violent acts, as there is no solid evidence directly linking both to the court cases.

Prosecutors argued Nomura deserved the harshest sentence because none of the victims in the four incidents had connections to rival gangs.

“Ordinary citizens became a target in all of the incidents, repeatedly posing a direct threat to society,” prosecutors said.

These incidents were “unprecedented in the extremely egregious nature of the crimes carried out by organized gangs,” they said.

Defense lawyers, on the other hand, denied Nomura’s involvement in the first and fourth incident, by saying that he “never had an interest in the cooperative.”

As for the shooting of a police officer, the defense argued that it would only backfire to strike against law enforcement, as it would prompt police to launch a tougher crackdown on the Kudo-kai.

For the stabbing of a nurse, Nomura’s displeasure with her was only temporary, defense argued.

Nomura “had no motivation to attack” in all four cases, the defense argued.

Prosecutors “have not taken other hypotheses into consideration because they want to forcibly tie (Nomura and Tanoue) with the incidents,” and they “are entirely focused on their self-righteous speculations,” defense said.

Nomura in his final statement said, “I am innocent.”

Tanoue said, “I have never been involved, not even in the slightest.”

Both have maintained their innocence.

Fukuoka prefectural police launched a massive operation in September 2014 to destroy the Kudo-kai and made arrests of senior members, including Nomura and Tanoue.

The trial of Nomura and Tanoue began in October 2019.

Out of safety concerns, the Fukuoka District Court decided to exclude the trial from a lay judge system where ordinary citizens are involved alongside professional judges.

A total of 62 hearings were held until March this year, and a total of 91 people including former gang members and police officers gave testimony.

Kudo-kai has been based in Kita-Kyushu, a major port city in the prefecture near its capital, Fukuoka, and a gateway to the Kyushu region, while extending its influence in areas around Tokyo with umbrella organizations.

Because the group had repeatedly violently attacked citizens, it has been named as a special-designated dangerous crime organization under the anti-organized crime law. Kudo-kai is the only organization designated as such in Japan.

Investigators enter the home of Satoru Nomura, head of the Kudo-kai organized crime syndicate, and arrest him on suspicion of murder and other crimes in September 2014. (The Asahi Shimbun)