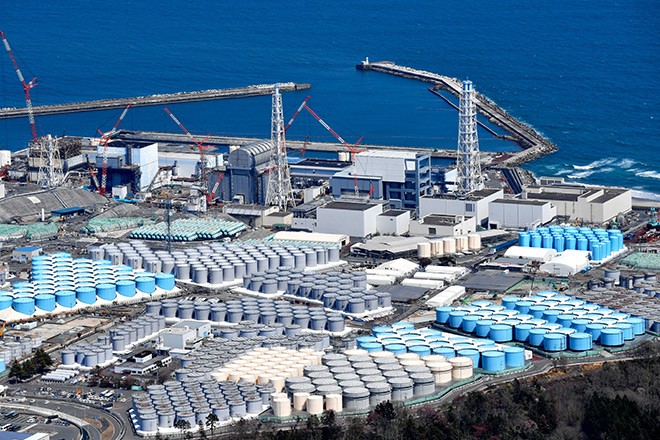 Tokyo Electric Power Co. plans to soon start preparations for laying pipes on the seafloor for discharging tons of treated contaminated water 1 kilometer from its crippled Fukushima No. 1 nuclear power plant to free up storage capacity at the site.

TEPCO is plagued by a continuous accumulation of highly contaminated water at the complex following the plant's triple meltdown triggered by the 2011 earthquake and tsunami disaster.

The utility announced Aug. 25 it plans to start releasing the water in spring 2023.

This will entail a study of the seafloor starting in September to prepare for installation of the pipes.

The volume of radioactive water from the plant keeps growing at a rate of 140 tons a day as groundwater flowing to and rainfall on the damaged reactor buildings become contaminated by mixing with highly radioactive water used to cool melted nuclear fuel at the site.

The contaminated water is kept in storage tanks after most of the highly radioactive material has been treated with equipment known as the Advanced Liquid Processing System (ALPS).

More than 1,000 tanks were set up at the nuclear complex to store the tainted water, and space is fast reaching capacity.

The government decided in April that releasing the treated water into the Pacific Ocean was the only way to resolve the problem.

Before being released, the radioactive water will be treated additionally with the ALPS and mixed with seawater to dilute the content.

As for tritium, a radioactive isotope of the element hydrogen which the ALPS cannot remove, it will be diluted to less than one-40th of the statutory standards for the discharge before it being released.

TEPCO must gain approval from the government’s Nuclear Regulation Authority to implement its plan for release by explaining the design of necessary equipment and other details.