(video caption) Investigators enter the home of Satoru Nomura, head of the Kudo-kai organized crime syndicate, and arrest him on suspicion of murder and other crimes in September 2014. (The Asahi Shimbun) 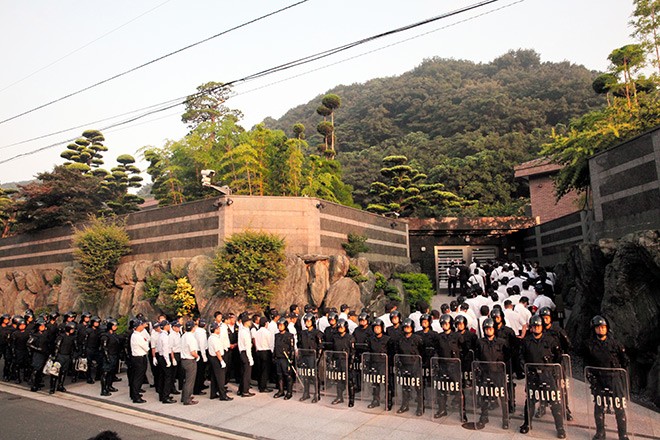 FUKUOKA--Seven years ago, prosecutors and police officers decided if they wanted to take down the most violent organized crime group in Japan, they would have to start by cutting off its head.

On Aug. 24, the unprecedented death sentence handed down against the don of the Kudo-kai gang and the life sentence against its second-in-command is the culmination of that strategy.

In 2012, the Fukuoka Prefectural Public Safety Commission designated the Kudo-kai as a “particularly dangerous gangster organization,” the first such designation in Japan.

But prosecutors and police officers felt that tougher measures putting the very top of the gang in their cross hairs were needed to weaken Kudo-kai's hold over Kita-Kyushu, the neighbor to Fukuoka city.

In the spring of 2013, Yoshinobu Onoue became the head of the Fukuoka prefectural police section dealing with organized crime in Kita-Kyushu. He teamed with Kazuo Amano, who had coincidentally been assigned to head the Kokura branch of the Fukuoka District Public Prosecutors Office. The branch is based in Kita-Kyushu.

The two went over past unsolved crimes to pin the blame on Satoru Nomura, the boss of Kudo-kai.

Trying to tie the two crimes together, Amano reviewed the court records of the 1998 shooting. Four Kudo-kai members were arrested on suspicion of murder and other allegations, including Fumio Tanoue, the No. 2 man of Kudo-kai, who was on trial along with Nomura.

Guilty verdicts were handed down to the two members who were found to have carried out the crime, but Tanoue was not even indicted and Nomura was not even arrested.

Amano and Onoue discovered testimony given in the court trial that raised the possibility that Nomura and Tanoue were involved in the shooting.

The two became increasingly confident they could make a case against the leaders of Kudo-kai after a January 2014 ruling in Osaka High Court. That court overturned a not guilty verdict of the Osaka District Court and found members of a Yamaguchi-gumi affiliated gang who had stabbed the head of a rival gang guilty of murder.

The Osaka High Court handed down the guilty verdict based on an assumption gathered through experience that “when a number of gang members prepare and carry out a crime, the gang boss gave the orders.”

Using that ruling as a precedent, Fukuoka police put together a plan for their investigation against Kudo-kai’s top leaders.

In April 2014, Onoue accompanied Masato Higuchi, the head of the Fukuoka prefectural police, to Tokyo for a meeting with officials of the Supreme Public Prosecutors Office and to gain their approval to proceed with the case.

Fukuoka prefectural police set Sept. 11, 2014, as the day to go on the offensive against Nomura. From early in the morning, about 150 riot police were standing by to make their move when a report was filed with Kokura-Kita Police Station by a police officer working out of a “koban” police box.

The police station served as headquarters for the arrest, but the local police officer was not part of the strategy and unknowingly questioned Nomura, who was riding in his Mercedes.

Those at the police station were stunned that Nomura was not at home and some feared that he was trying to flee.

But a subsequent report said Nomura had returned home.

Higuchi gave the order to move out and at 6:44 a.m. police investigators entered Nomura’s home and escorted him out about 40 minutes later. He was arrested on four counts, including the 1998 murder of the former fishery cooperative leader.

Higuchi announced the arrest himself at a news conference and took the unusual step of calling out to Kudo-kai members.

“I hope you will decide to quit Kudo-kai after thinking about your own future as well as your family's,” Higuchi said. “We will provide total support to anyone who decides to walk down the path of rehabilitation.”

Fukuoka prefectural police set up a special task force made up of 3,800 police officers to look into any and all crimes linked to Kudo-kai. By the end of May, about 390 members had been detained.

Seven years after the strategy to go after the top Kudo-kai leaders was put in place, Nomura was given the death sentence, while Tanoue was handed a life sentence.

Onoue has since been promoted to head the criminal investigation bureau of the Fukuoka prefectural police, but he is scheduled to retire in September. He will then work with another agency involved with driving organized crime gangs out of Fukuoka Prefecture.

“While the strategy has met its objectives, we are still only halfway to the goal of crushing Kudo-kai,” Onoue said.

Amano retired as a prosecutor in 2015 and said he was encouraged by the district court ruling and hoped that it would convince others to come forward with information to prosecute other unsolved crimes linked to Kudo-kai.

Higuchi retired from the National Police Agency in 2016 and now works as a lawyer in Tokyo. He declined to be interviewed on the grounds that the various measures targeting Kudo-kai “were due to the cooperation obtained from a large number of ordinary citizens on the part of the police and prosecutors.”